Usman Khan and his horse Azad Kashmir secured an Olympic spot in the eventing discipline [Photo: Courtesy of Oz Shots]

Usman Khan was seven when he first started horse riding. His father, a military officer at the time, would take him and his younger brother, Salman, for lessons at the Cavalry Ground army riding school in Pakistan‘s eastern city of Lahore.

“Growing up, I always wanted to do something as an athlete for Pakistan,” Khan, the country’s top equestrian athlete, told Al Jazeera in a phone interview from Melbourne, Australia, where he resides.

“I wanted to be able to compete at the Olympic level, but motivation has always been about Pakistan,” the equestrian holding dual nationalities said.

Equestrian is considered an elitist sport in Pakistan, unheard of by many. Yet, it is one of a handful of sporting events in which the cricket-loving South Asian nation will be represented at the 2020 Tokyo Olympic Games, which kick off in the Japanese capital in July.

Khan and his horse, Azad Kashmir – named after the Muslim-majority Himalayan region administered by Pakistan – secured their maiden Olympic spot in the individual eventing discipline in December, becoming the first Pakistani to do so.

For the 38-year-old rider, it was a culmination of a 15-year struggle that has taken a physical and financial toll on him.

The challenges have been countless, he said.

“When you choose a very unpopular sport in Pakistan, and it’s a very expensive sport … When you make a decision like that, you have to do it all by yourself.” 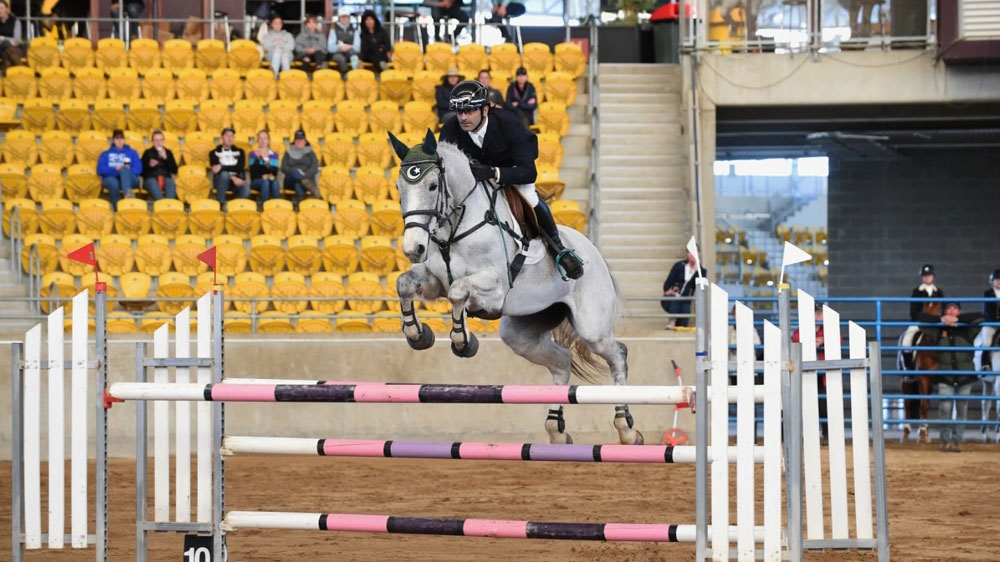 Khan is currently ranked number one in eventing in FEI’s Africa and Middle East zone [Photo: Courtesy of Oz Shots]

Khan went to a university in Adelaide and graduated with a bachelor’s degree in Geographical Information System, but soon after switched gears and picked up eventing – an equestrian discipline which combines dressage, cross-country and show jumping.

In 2005, the Lahore-native left his master’s research scholarship in Geography and Environmental Sciences at Melbourne’s Monash University to focus on his riding career, which was only brought to an abrupt halt in 2006 when he broke his leg, forcing him out of the sport for two years.

He resumed riding in 2008, but was broke and without any sponsors to support him.

For almost 15 years, the overseas Pakistani juggled riding with a day job working as an IT consultant to keep his Olympic dream alive.

He twice represented Pakistan at the Asian Games in 2014 and 2018 – another maiden feat for the country – and travelled across Australia to different International Federation for Equestrian (FEI) events.

He said he has spent approximately 3 million Australian dollars ($2m) from his personal savings to fund his athletic career. 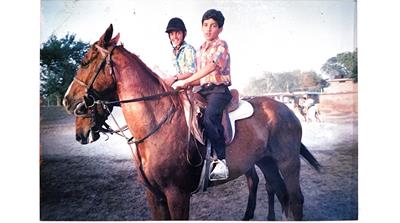 Khan, right, and his brother started riding at a young age [Photo: Courtesy of Usman Khan]

“I’m very happy because he had struggled a lot, spent a lot from his own pocket,” Shahnaz Amna, Khan’s mother, said about his qualification.

“It was all his struggle, his solo struggle,” she told Al Jazeera.

But it does not end there, as more funds will be required to make the trip to the Summer Olympics, especially as Khan quit his job in July last year.

The president of Pakistan’s cash-strapped Olympic association (POA), Syed Arif Hasan, said he will appeal to the government and private sponsors to make that possible.

“The [Pakistan] Olympic Association is not really financially on a very sound footing, so we hardly are able to support any athletes,” Hasan told Al Jazeera.

“He [Khan] has been at it through his will and has qualified … we are going to try and make sure that he does go and participate,” he added.

A seven-member team represented Pakistan at the 2016 Rio Olympics. So far, five athletes across three different sports are confirmed for the Tokyo Games.

Khan is hoping to perform well and make his country proud, competing with Azad Kashmir.

Since partition in 1947, the disputed region of Kashmir has remained a contentious issue for India and Pakistan, who have fought two of their three wars over the strategic territory.

The nuclear-armed neighbours administer parts of the region, but claim it in full.

Cross-border tensions between the rivals have remained high since New Delhi stripped Indian-administered Kashmir of its limited autonomy in August last year, followed by a nearly six-month communication blackout.

Athlete protests and political gestures are prohibited at the Olympics, so Khan is hoping his horse will highlight the natural beauty of Kashmir amid the simmering tensions.

“I love my horses,” Khan said. “I always named them to signify the bond I have had with what has been close to me in life.

“So, naming Azad Kashmir is just in the series of how I have named my horses. The land of Kashmir is blessed with breathtaking and charming beauty.

“I shall merely ride in the Olympics to do well with the horse and make my country proud.”