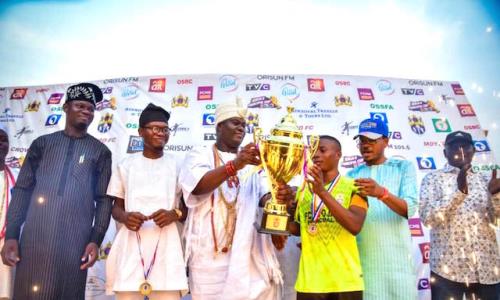 ODUDUWA College of Ile-Ife has obtained the Ojaja Principal Cup Champion for the second time after whitewashing their counterpart from Progress Academy in a really entertaining encounter.

The two groups had confirmed themselves earlier than reaching this stage of the competitors after reaching the finals from superb semis.

His Imperial Majesty Ooni Adeyeye Enitan Ogunwusi Ojaja II who juggled the ball spherical complete pitch to the admiration of the spectators and visitors praising and counting as Kabiyesi skillfully remembered his Loyola College days kicked off the sport which occurred at Oduduwa College soccer pitch.

It was a straightforward experience for Oduduwa College as they took the lead within the second minute when Adebiyi Pelumi opened the scoreline with an outstanding volley from 12 yards out.