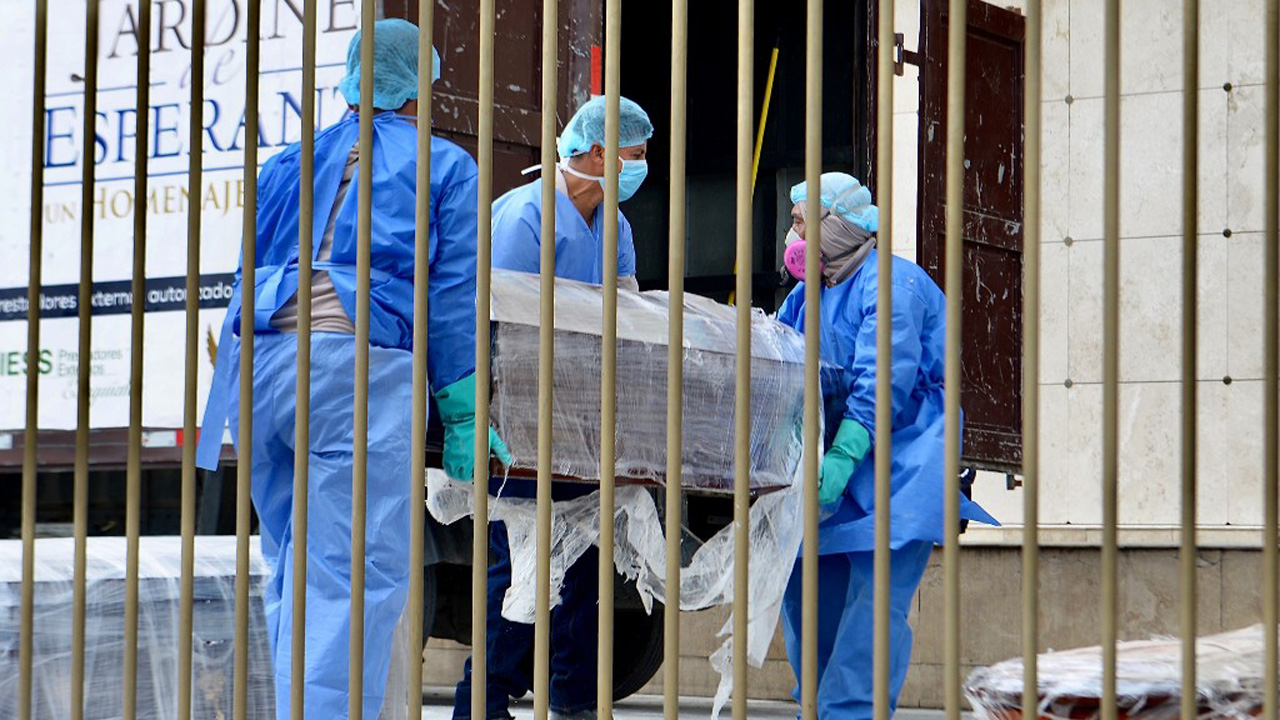 Employees wearing security outfits carry the coffin of a person who presumably died from the new coronavirus at a cemetery in Guayaquil, Ecuador on April 1, 2020. Residents of Guayaquil, in Ecuador’s southwest, express outrage over the way the government has responded to the numerous deaths related to the novel coronavirus, COVID-19, saying there are many more deaths than are being reported and that bodies are being left in homes for days without being picked up. Ecuador marked its highest daily increase in deaths and new cases of coronavirus on Sunday, with the total reaching 14 dead and 789 infected, authorities had said. Marcos Pin / AFP

The global death toll in the coronavirus crisis soared past 60,000 on Saturday as calls grew for citizens to wear face masks to halt the pandemic’s devastating spread.

New York state, the worst affected in the US, saw a record 630 deaths in a single day. Britain too reported a new daily high in fatalities, including a five-year-old child.

There was better news from hard-hit Italy and Spain, where infection and fatality rates were slowing down, offering a glimmer of hope for Europe.

More than 1.1 million people have now fallen ill and over 60,000 people have died since the virus emerged in China late last year, according to an AFP tally.

Billions of people are living under some form on lockdown, with roughly half the planet confined to their homes, with schools and businesses closed to help stem the outbreak, at huge cost to the global economy.

Europe continues to bear the brunt of the epidemic, accounting for over 45,000 of the worldwide deaths, but the situation is deteriorating rapidly in the United States.

“Anyone who’s not already in this fight, we need you,” Mayor Bill de Blasio said.

The US has counted more than 7,000 coronavirus deaths and is in urgent need of protective gear for health workers and medical equipment.

President Donald Trump’s administration on Friday recommended that Americans wear simple masks or scarves to slow the infection rate, the latest Western nation to reverse earlier claims that only carers needed them.

‘Numbers are improving’
The picture remained grim in Europe.

But Spain, which is under a near-total lockdown, saw a second successive daily fall in coronavirus-related deaths with 809 fatalities.

The total number of deaths in the country now stands at 11,744, second only to Italy.

Spanish Prime Minister Pedro Sanchez has nevertheless announced the extension of the country’s lockdown until April 25.

At a field hospital in Madrid set up at a conference centre, staff took a break to applaud whenever a patient was healthy enough to be discharged.

One of them was 59-year-old builder Eduardo Lopez who said he gave a “10/10” rating to the staff who cared for him “with tenderness and a great dose of humanity”.

Italy reported its first drop in the number of coronavirus patients in intensive care treatment since the start of a crisis there.

The daily rise in new infections across Italy has also slowed. The country reported 681 new deaths on Saturday, down from a peak of almost 1,000 just over a week ago.

Greece meanwhile extended its lockdown by three weeks to April 27.

‘A voluntary thing’
Several Western countries including Germany and France have in recent days encouraged the use of masks in public despite earlier saying that carers needed to cover their faces.

The U-turn has angered and confused some citizens, and spurred a flurry of online tutorials for DIY masks.

It comes after some studies suggested infected droplets can travel farther than thought, and that any protection is better than none.

Anthony Fauci, head of infectious diseases at the US National Institutes of Health, cited “recent information that the virus can actually be spread even when people just speak as opposed to coughing and sneezing”.

But Trump himself said he wouldn’t be covering up.

“It’s going to be really a voluntary thing,” Trump said. “You don’t have to do it and I’m choosing not to do it, but some people may want to do it and that’s okay.”

The World Health Organization is reviewing its guidance but has said it worries that masks could give “a false sense of security” that could lead people to be more casual about hand washing and social distancing.

The US recommendation will likely worsen an already severe shortage of masks in the US and Europe, which both rely heavily on imports from China.

Many people in Asian countries have long had the habit of wearing masks when ill and are baffled by Western reluctance to use face masks during the pandemic.

Day of mourning
China came to a standstill on Saturday to mourn the patients and medical staff killed in the outbreak that started in the city of Wuhan before sweeing the globe.

Across the nation, cars, trains and ships sounded their horns, and air-raid sirens wailed.

“I feel a lot of sorrow about our colleagues and patients who died,” said Xu, a nurse who worked on the front lines in Wuhan.

“I hope they can rest well in heaven.”

China appears to be over the worst of the outbreak with normal life returning in some parts, but fears remain of a second wave of cases.

‘Worst yet to come’
There was another warning over the fate of the less developed world, especially conflict zones and places with large refugee populations.

“The worst is yet to come,” UN chief Antonio Guterres said, referring to countries such as Syria, Libya and Yemen. “The COVID-19 storm is now coming to all these theatres of conflict.”

The impoverished West African nation of Liberia meanwhile announced that a 72-year-old man had become its first coronavirus fatality.

While Africa has yet to feel the full force of the pandemic, concern is mounting over how the continent would cope.

The World Food Programme said the virus threatens to cause food shortages for hundreds of millions of people, especially in Africa.