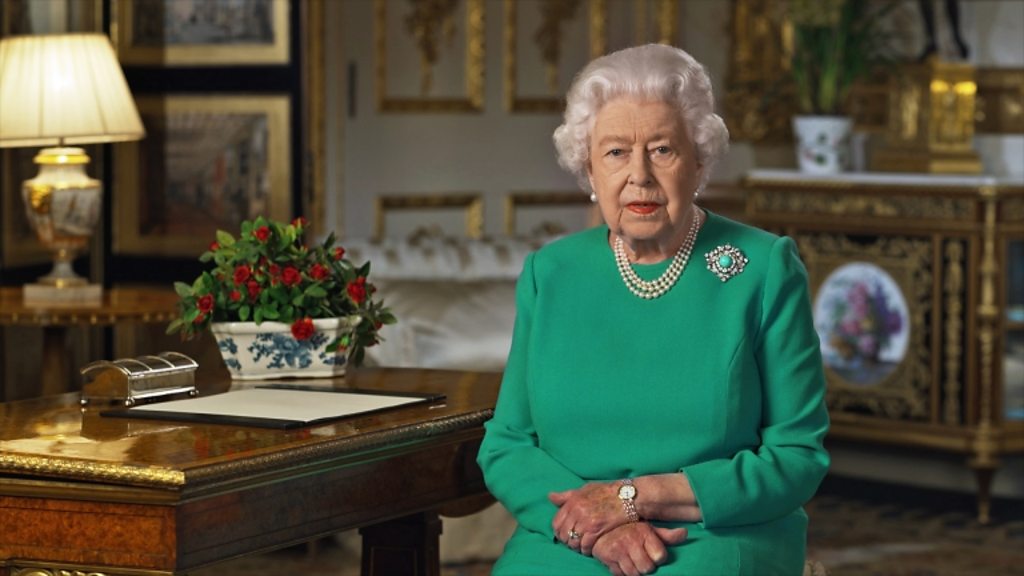 The Queen has said the UK “will succeed” in its fight against the coronavirus pandemic, in a rallying message to the nation.

In a rare speech, the monarch thanked people for following government rules to stay at home and praised those “coming together to help others”.

She also thanked key workers, saying “every hour” of work “brings us closer to a return to more normal times”.

It comes as the number of people to die with the virus in the UK reached 4,934.

‘We will meet again’

“While we have faced challenges before, this one is different,” the Queen said.

“This time we join with all nations across the globe in a common endeavour, using the great advances of science and our instinctive compassion to heal. We will succeed – and that success will belong to every one of us.

The Queen, 93, also said the “painful sense of separation from their loved ones” that social distancing was causing for people reminded her of the experience child evacuees had during the Second World War.

The monarch said everyone who was following guidance to stay at home was “helping to protect the vulnerable and sparing many families the pain already felt by those who have lost loved ones”.

“Together we are tackling this disease, and I want to reassure you that if we remain united and resolute, then we will overcome it,” she added.

There have been difficult royal speeches and addresses in the past – times when the wrong word or the wrong phrase could have undermined the message or let slip a critical opportunity.

The broadcast after the death of Diana, Princess of Wales in 1997 for example, or the speech the Queen gave on her visit to Ireland in 2011.

The Palace could have played it safe, stressed unity and given thanks. It would have served.

This was a different and much more ambitious broadcast, designed to reassure and to inspire.

But most of all to recast this crisis as a defining moment in a nation which will forever remember its collective effort to save the lives of its vulnerable.

The message was filmed by a single cameraman wearing protective equipment, with all the other technical staff in another room.

It was broadcast on TV, radio and social media channels.

The decision to deliver the address was made “in close consultation with Downing Street”, BBC royal correspondent Nicholas Witchell said.

The Queen’s address came less than a week after her son, the Prince of Wales, came out of self-isolation, following his coronavirus diagnosis.

The Queen’s four other special addresses

It is only the fifth time the monarch has given such a speech in her 68-year reign.

While her Christmas Day message is an annual event, only rarely has the Queen made rallying speeches at key moments in the life of the nation:

On Sunday the UK government’s Health Secretary Matt Hancock urged the public to follow social distancing rules over a sunny weekend to protect the NHS and slow the spread of the virus.

The Department of Health said on Sunday there had been 621 more coronavirus-related deaths in the UK in the past day.

The latest deaths include 12 more in Wales, seven in Northern Ireland and two in Scotland.