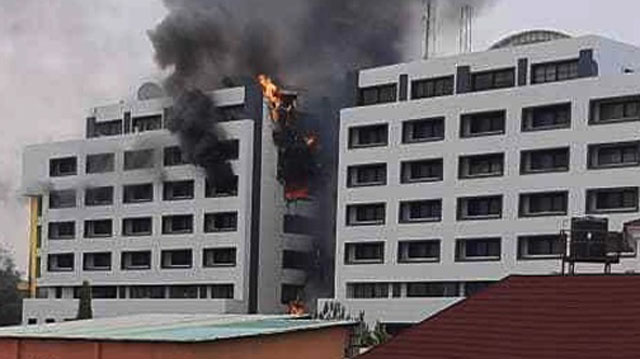 The Federal Government was asked yesterday to launch an investigation into the fire incident which destroyed a section of the office of the Accountant General of the Federation (AGF) in Abuja yesterday.

The office is home to the records of revenue generation and disbursements among the three tiers of governments. It also archives the government’s fiscal accountability and transparency monitoring platform (Treasury Single Account).In addition, it stocks all records of states’ domestic and foreign indebtedness.

The Peoples Democratic Party (PDP) said there must be a full-scale probe into the circumstances surrounding the inferno, giving its uncanny timing and the significance of the offices involved.

“Nigerians are anxious to know those behind this wicked arson because the fire outbreak reportedly occurred on the part of the building, which hosts critical offices including the Treasury Single Account, Funds, Federation Account Allocation Committee and Revenue Department,” the party said yesterday in a statement by National Publicity Secretary Kola Ologbondiyan.

“Our party expresses shock that the fire incident came on the heels of our heightened calls for a forensic audit into the hazy oil subsidy regime of the President Buhari-led administration for which trillions of naira are being claimed to have been spent.

“This is in addition to recent demands for an investigation into allegations of fraud and diversion of COVID-19 intervention funds, as well as the social investments programme of the Buhari government since 2015.

“Already, the National Assembly, riding on the gale of demands by Nigerians, and championed by the PDP, has raised queries on spending in respect of social incentives programmes.”

It added: “Our party, therefore, calls for an immediate investigation to determine the actual cause of the fire, as well as ensure that critical documents and data on government revenue and expenditure are immediately retrieved.The PDP also demands that the complex be immediately cordoned off to enable an uncompromised inquest into this ugly incident.”

Similarly, the Human Rights Writers Association of Nigeria (HURIWA) urged Nigerians to demand a forensic investigation by independent criminal forensic scientists. It said this would ascertain the real motives or otherwise behind the incident barely 24 hours after the Senate uncovered an alleged monumental heist in the Federal Government’s schools feeding programmes.

In a statement by National Coordinator Emmanuel Onwubiko and National Media Affairs Director Zainab Yusuf, HURIWA said Nigerians must not accept any unconvincing stories but insist the government comes clean on how it has been unable to transparently render accounts of revenues generated from internal and external sources.

HURIWA said too many things were wrong with how Federal Government officials administer public finance.It questioned claims in the media that the Nigeria Customs Service (NCS) and the Federal Inland Revenue Services (FIRS) generated billions in revenue since 2015, yet the finance minister goes cap-in-hand begging for foreign loans.

“Something is not adding up,” HURIWA said concerning the “sudden fire incident at the office of the Accountant General of the Federation barely few hours after serious suspicion of misuse of public funds running into billions was raised by the usually pliant and docile National Assembly.”

It said the incident was too coincidental, coming at a time of mounting accusations of fraud and failure by the Federal Government to account for how the billions budgeted for the payment of N20,000 COVID-19 palliatives to poor Nigerians were spent.

“HURIWA strongly believes that the fire is too suspicious to be dismissed as a mere accident or happenstance. In Nigeria, public officials are known to always set their offices ablaze in a bid to cover up their tracks. Questions are being asked on how over N60 billion was reportedly blown away by the Federal Government in the guise of implementing conditional cash transfer to some ghosts and some political nitwits rather than to the millions of poor Nigerians.

“How did this cash get shared and frittered away in a few hours? To whom did this humongous cash get to, and where are the records since the National Assembly only yesterday raised the alarm? And 24 hours later, there was a fire at the office of the Accountant General of the Federation?

“We are not accusing anyone of theft. We have not called any officer of the Federal Government a thief. But certainly, we smell a rat. What we know is that this fire is too suspicious to be dismissed as a mere accident or happenstance.”

HURIWA recalled that around February 18, the Senate’s Public Accounts Committee adjourned abruptly, following the inability of the office of the Accountant General of the Federation to give details of the IPPIS project initiated by the Federal Government to improve the effectiveness and efficiency of payroll administration for its Ministries, Departments, and Agencies (MDAs).

In the same vein, the president of Centre for Change, Dr. Joe Okei-Odumakin, said in a statement: “This is distressing. More questions than answers will trail this incident. Why now, when Abuja is on lockdown? Why now, when everyone is on a stay-at-home? Why this very important office, having to deal with money and records of money?”

She noted: “Nigerians are conversant with this kind of shenanigans in the past where fire outbreaks in sensitive government ministries, departments and parastatals were meant to cover up tracks.

“But why add to our woes? The money will be used to put out the fire while billions will also be needed to repair the burnt edifice. What next? Bland statements from government…promises of a probe, and truly, the setting up of probes panel.

“The panel, too, will sit and spend money. In the end, volumes of reports of its findings will be submitted with glee to government. Possibly, another review panel will be constituted to review the work of the probe panel.

“Then a White Paper drafting committee will be empanelled. By this time, the public would have forgotten about the fire incident! More scandals of more bizarre nature and the damaging outcome would have fallen upon one another.

“Then the findings concerning this fire will be swept under the carpet and the White Paper allowed to gather dust in some cupboard filled with similar skeletons. And life continues. That is how it has been here. Whether this one will be different remains to be seen.”

But the Minister of State for Finance and National Planning, Mr. Clem Agba, who was at the scene of the incident, maintained that sensitive data were not lost.

He said: “We have gone round the rooms and offices where the fire affected and I’m glad to announce to you that our data centre where all our records are kept is intact. No destruction, so we haven’t lost any record.

“I have to inform you that for some time now, we have gone digital. We still have a few things that we do manually, but a lot of things now are online. Even if the data centre were to be affected, we have a back-up outside Abuja.”

He noted further: “A few documents are burnt. We haven’t started to check what is burnt and what is not burnt. But all our financial transactions are intact. We would be doing a full-scale investigation using the right professionals, just to determine what happened.”

The Accountant General, Alhaji Ahmed Idris, said the building had a comprehensive insurance policy, which would be explored. He also promised that a professional investigation agency would be engaged to unravel the cause of the fire.

Meanwhile, the Federal Government has reportedly slashed N312 billion from projects approved in the 2020 budget. The move followed the drop in revenue and oil prices as a result of the coronavirus pandemic.