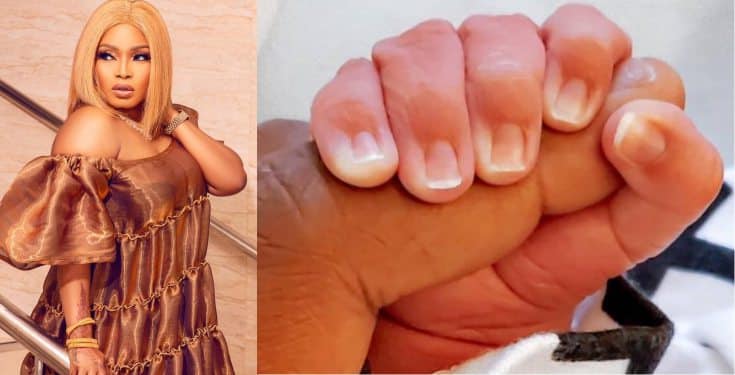 Some few days ago, Nollywood actress Halima Abubakar announced the birth of her child with a photo of a baby’s hand holding an adult’s thumb.

However, it turned out this photo belongs to an American mom named Ariel.

A little digging done on Instagram shows that Ariel posted her photo on March 13 while Halima shared the same photo this April (two days ago, as at the time of reporting).

According to screenshots of direct messages between Ariel and Halima, it showed the actress admitted that she only posted the photo to announce her child’s birth. In her defense, she wasn’t referring to Ariel’s baby; she saw the photo on Google and because she liked the nails, she couldn’t help but repost it.

Halima then went on to tender an apology stating she will delete the photo while congratulating Ariel on the birth of her child.

But, all of these did not go unnoticed as many Nigerians responded differently to the news.

See some reactions below:

What Halima Abubakar did can be tied to clout chasing, cuz there’s no much difference from big bra’s own some weeks back. So I’d advice you put same energy you used to drag big bra to also drag her.

I actually think Halima Abubakar has been through alot.

You guys should allow her nurse her baby in peace please,she did not kill anybody.

Just like Oge Okoye and her own case,this too shall pass.

The constant dragging from holier than thou people here can be depressing.

Halima Abubakar has a child in ICU,she’s still recovering from Delivery,but no,everyone has to air their opinion,I hope she has a good support system,I really hope so for her sake.

This halima abubakar drama just made me remember when Oge okoye stole a foreigner dog picture and uploaded it as hers.
These same celebrities are the ones that will come and tell us we are poor if we drag them. pic.twitter.com/HIj9fMEzh7

We still have PTSD from Oge Okoye stealing photo of another person’s dog, and Halima Abubakar is being dragged on IG right now for stealing a baby’s photo.

These actresses will embarrass you😩 pic.twitter.com/mcyegAGBH5