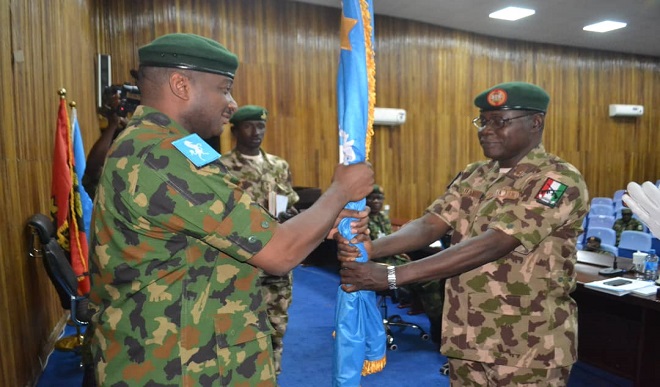 From the left is the outgoing GOC 1 Division Nigerian Army, Maj.-Gen. Faruk Yahaya presenting the Division’s flag to the new GOC Maj.-Gen. Usman Mohammed, on Friday in Kaduna. PHOTO: NAN

The News Agency of Nigeria (NAN) reports that Mohammed took over control of the command from Maj.-Gen. Faruk Yahaya, who had assumed duty as the new Theatre Commander, Operation Lafiya Dole in the Northeast.

The occasion, held at the Division headquarters in Kaduna, was observed in strict compliance to social distancing directive by the Nigerian Centre for Diseases Control (NCDC) to curb spread of COVID-19.
Prior to his appointment as the 36th GOC, Mohammed was Chief of Civil Military Affairs at the Army Headquarters, Abuja.

In his speech, Mohammed lauded his predecessor for his sterling leadership and mentorship of officers in the Division during the period of his tour of the command.

The new GOC promised to follow the foot steps of his predecessor and build on the foundation already laid to uplift the Division to higher pedestal.

Mohammed urged officers and soldiers of 1 Division to extend to him the same cooperation and commitment which they gave to his predecessor.

Earlier in his farewell remarks, Yahaya thanked the Chief of Army Staff, Lt.- Gen Tukur Buratai for the opportunity given him to contribute to the fight against armed banditry, kidnapping and other criminal elements bedeviling the Division’s Area of Responsibility.

He applauded commanders, officers and soldiers of 1 Division for their commitments, loyalty and cooperation during his tour of duty.

The outgoing GOC said their contributions to successes recorded by the Division were exceptional and encouraged them to extend same cooperation and support to his successor.

NAN reports that highlights of the brief ceremony included the decoration of the new GOC with the division’s insignia, handing and taking over of the division’s Flag of Command, presentation of memorabilia to the outgoing GOC by commanders and principal staff officers as well as inspection of farewell quarter guard by the outgoing GOC.