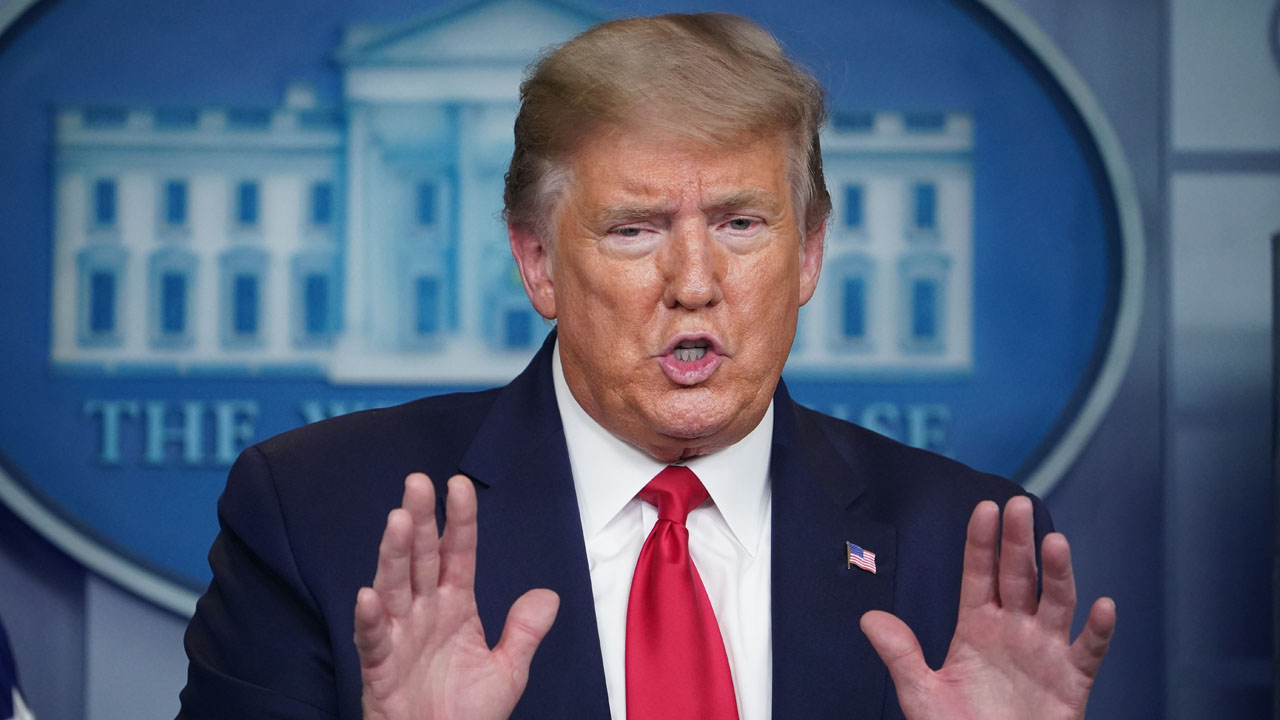 US President Donald Trump speaks during the daily briefing on the novel coronavirus, which causes COVID-19, in the Brady Briefing Room at the White House on April 13, 2020, in Washington, DC. (Photo by MANDEL NGAN / AFP)

A furious, aggrieved President Donald Trump dismissed rumours Monday that he was going to fire his top medical advisor on the coronavirus pandemic but launched new fights with the Democrats and the media ahead of the high-stakes reopening of the shuttered US economy.

Unusually, the evening briefing at the White House began with a statement by the internationally renowned Dr Anthony Fauci, seeking to defuse speculation that he had fallen out with the Republican president.

Referring to a CNN interview on Sunday in which he said that earlier mitigation measures would have dampened the escalation of the COVID-19 crisis in the United States, Fauci explained that he’d been answering a “hypothetical.”

Fauci explained his reference in the interview to “pushback” against shutting down the economy — a remark interpreted widely as signalling that Trump was reluctant to take drastic action — as the “wrong choice of words.”

Trump, who on Sunday fueled speculation by retweeting a critical comment with the hashtag #FireFauci, sought to draw a line under the latest White House turmoil.

But Trump then launched into a sustained assault on other targets, demonstrating his frustration with accusations that he has mishandled the crisis.

With his reelection in November a tight contest against Democrat Joe Biden, Trump is under huge pressure both to crush the pandemic’s spread and to rescue the world’s biggest economy, which has been paralyzed by social distancing and other virus mitigation measures.

Attack on media
Incensed at what he considers to be unfriendly media coverage, Trump ripped into The New York Times, CNN and other major outlets.

“The problem is the press doesn’t cover it the way it should,” he said of widespread perceptions that the US coronavirus response has been slow and hampered by inefficiencies.

Trump said he had been “brutalized” by the media.

Then, in a first for the daily briefings — which have taken an increasingly political tone after having initially been dedicated to informing the public about the coronavirus –, Trump made reporters in the room watching a video compilation of officials and others praising his work.

Pressured afterwards by a CBS News journalist about a long pause before the decision to shut down the economy, Trump lashed out: “You’re disgraceful.”

“You know you’re a fake,” he told the reporter, seated a few feet away.

To reopen or not
The next phase of the crisis is imminent, with Trump saying he will announce Tuesday the team preparing the reopening of the economy.

Refusing to give a date for the reopening, Trump hinted that areas with less coronavirus could be allowed to open earlier, in a staggering operation. He said he was “very close” to having a detailed plan.

But for weeks, the White House has given mixed messages over whether the federal government or states should lead the coronavirus response.

Earlier Monday, the governors of California, Oregon and Washington states announced they were coming up with their own coordinated plan for easing social distancing.

New York, New Jersey and other northeastern states also said they were forming a group to make decisions.

Trump warned the governors, who are Democrats, that they would instead have to go along with his orders.

“They can’t do anything without the approval of the president,” he said in comments threatening to veer into constitutional law controversy.

“When somebody’s the president of the United States, the authority is total,” Trump said.