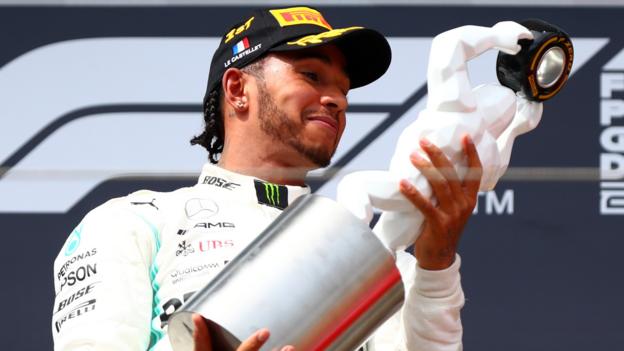 The French Grand Prix is set to be the next Formula 1 event to be postponed as a result of the coronavirus crisis.

French President Emmanuel Macron said in a televised address to the nation on Monday that restrictions on public events would continue until mid-July.

France’s round of the F1 championship is set to be held at the Circuit Paul Ricard, near Marseille, on 28 June.

F1 was unable to officially confirm the situation surrounding the race when contacted by BBC Sport.

Macron said France’s lockdown would be extended until 11 May, after which creches and primary and secondary schools would progressively reopen, while bars, restaurants, and cinemas would stay shut. There would be no summer festivals “before mid-July”.

The move seems to make it impossible to hold an event that was attended by 135,000 people last year.

The race would be the 10th Grand Prix to be called off at the start of a season that has been laid waste by the coronavirus crisis.

F1 says it is considering all options as it looks for a way to reconfigure the season later this year.

The current hope is that the season can start in Europe in the summer, and it is possible that the first races at least could be held behind closed doors.

Ross Brawn, F1’s managing director, said last week that a viable world championship season could be held before the end of the year even if the first race did not take until October. But he added that the season could run into January 2021 to fit in more races.

F1 is facing a serious financial shortfall as a result of the lack of racing as all three of its main revenue streams are under threat – race-hosting fees, broadcast rights and sponsorship income.

Only one race has so far been cancelled permanently – Monaco decided to give up on its event this year because it said it could not find a suitable alternative slot.

All the others have been postponed in the hope of finding alternative dates once racing can get under way.

The F1 teams are currently on a factory shutdown, having brought the traditional summer break forward from August so as to be in the best place possible once travel restrictions are lifted.

Five of the seven UK-based teams have placed many of their staff on enforced leave as a result of the lack of action.

And F1’s bosses have taken a series of steps to cut costs with the future so uncertain.

Measures include the postponement by a year of a major regulation change that was scheduled to come into force in 2021, and the requirement for teams to use the same cars for the 2021 season as they will this year.

And bosses are in the midst of negotiations over lowering the budget cap that is set to come into force next year at $175m (£137.9m).

A reduction to $150m has already been agreed informally and there is a meeting scheduled for this week to discuss the idea of potentially reducing it to $125m.