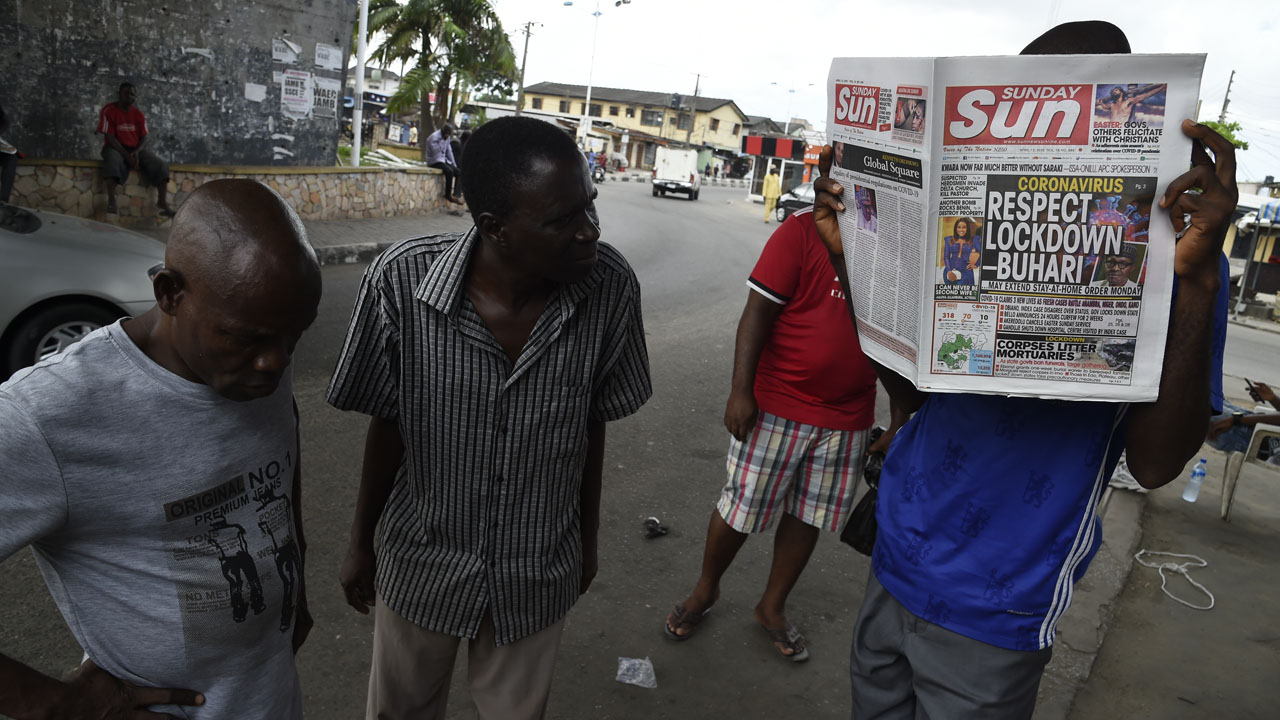 People read newspaper to know more about the extended lockdown as part of measures to prevent the spread of COVID-19 coronavirus at a newsstand in Lagos, on April 12, 2020. – Christians observed the traditional Easter services indoors as most churches were closed to worshippers, while some conducted their services online in compliance with the sit-at-home order imposed by the government to contain the spread of COVID-19 coronavirus in Lagos. (Photo by PIUS UTOMI EKPEI / AFP)

Sub-Saharan African economies are projected to contract by 1.6 percent in 2020 due to blanket lockdowns, curfews and closures imposed by governments to brake the coronavirus juggernaut, the International Monetary Fund (IMF) said Tuesday.

The GDP of the continent’s economic superpowers, Nigeria and South Africa, is expected to shrink by 3.4 and 5.8 percent respectively as a result of the pandemic, which has crushed global demand and caused commodity prices to plummet.

“The health crisis is… having a severe impact on economic activity,” said the IMF in a world economic outlook released on Tuesday.

It projected the global economy would contract by 3.0 percent this year — worse than during the 2008-09 financial crisis.

“Among emerging market and developing economies, all countries face a health crisis… which will have a severe impact on economic activity in commodity exporters,” said the report.

The bleak figures were released following a grim prediction by the World Bank, which warned last week that sub-Saharan Africa could slip into its first recession in 25 years because of coronavirus.

Africa continues to lag behind the global curve for coronavirus infections and deaths.

To date the world’s poorest continent has recorded nearly 15,500 cases of the respiratory disease and almost 850 fatalities, according to an AFP tally which includes North Africa.

Many African governments used precious time to close borders and impose stay-at-home laws to stem the disease when just a handful of cases had been confirmed.

“Even in countries not experiencing widespread detected outbreaks… the significant downward revision to the 2020 growth projection reflects large anticipated domestic disruptions to economic activity from COVID-19,” the IMF said.

South Africa had already slipped into recession in the final quarter of 2019 and recently saw its credit ratings cut to junk status.

Oil giants Angola and Nigeria saw their revenues tumble with the global fall in oil prices, as air travel has almost ground to a halt due to the pandemic.

The IMF said fiscal measures provided the keys for easing the slump and helping businesses recover once shutdowns are lifted.

It called on “external support” for countries “facing financing constraints to combat the pandemic”.

South Africa’s central bank also predicted on Tuesday that the economy would shrink by 6.1 percent in 2020 as it cut its main interest rate by a full percentage point.

“Fiscal stimulus can preempt a steeper decline in confidence, lift aggregate demand and avert an even deeper downturn,” said the Fund.

“But it would most likely be more effective once the outbreak fades and people are able to move more freely.”