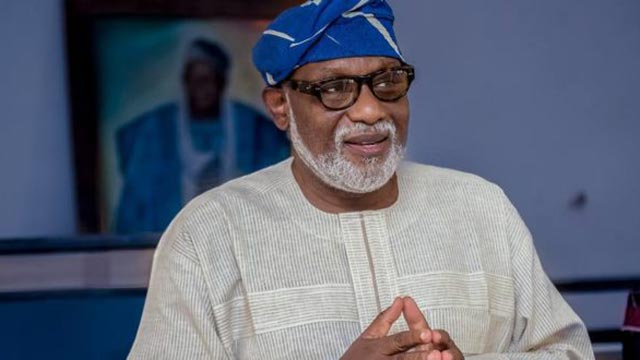 • State’s council poll not cancelled, says ODIEC
Despite the ravaging effects of the coronavirus pandemic, it has become a huge blessing in disguise for all the major contenders vying for the October 10, 2020 governorship election in Ondo State, especially the incumbent governor, Mr. Oluwarotimi Akeredolu. The drive to get the people’s support and sympathy is not limited to the ruling All Progressives Party (APC), but is also a strong campaign strategy for the opposition parties, which have vowed to defeat Akeredolu.

Meanwhile, the present administration has put in place proactive measures to curtail the pandemic, as the only state in the South West yet to have a case until recently when the first and only case was recorded on Thursday. Akeredolu had shut all schools, markets, churches, social gatherings and eventually closed all the borders connecting Edo, Kogi, Delta, Ekiti, Osun and Ogun States, and set up palliative and fund-raising committees to cushion the effects.

Also, Ondo State lawmakers have kicked against their inclusion as assistants in the coronavirus Palliative Committee set up by Governor Akeredolu to cushion the effects of the pandemic on the people. They declared, without mincing words, that none of them would serve under cabinet members in the committee, saying it was disrespectful to the Assembly as an institution. In a statement made available to journalists in Akure yesterday by the House Committee Chairman on Information, Hon. Olugbenga Omole, the 26 Assembly members rejected the assignment by the governor.

Omole disclosed that some lawmakers in a particular local government were co-opted to serve as assistants to cabinet members of the Palliative Committee. He stated that the decision was to spite their offices, lamenting that they were the elected representatives of the people and would not subordinate their position to any cabinet member.

The committee chairman added, however, that in a resolution after the meeting on Monday, the lawmakers lauded Governor Akeredolu for setting up the Palliative Committee meant to bring succour to the people. According to him, the meeting was presided over by the Speaker, Bamidele Oleyelogun, where they unanimously passed a vote of confidence on the speaker, deputy speaker, majority leader and other principal officers of the

According to analysts, there are underlying motives behind the palliatives by the state government-led by Akeredolu, who is seeking re-election alongside other aspirants within APC and opposition parties. Some House of Representatives and state Assembly members, who have lost favour with their constituents, have cashed in on the COVID-19 pandemic to curry the support of their people, with some basically utilising the occasion to expand their support base.

The House of Representatives member representing Akoko North West/Akoko North East Federal Constituency, Mr. Olubunmi Tunji-Ojo, distributed food and other relief materials to his people, and donated N200,000 to the state’s NUJ Council. Though PDP’s governorship candidate in the 2016 election, Mr. Eyitayo Jegede, who is also seeking the party’s ticket again for the October poll, was the first candidate to donate rice and cash gifts across the 18 councils.

According to Jegede, “There is the need for individuals blessed by God and with something extra to spare in the state to come together and salvage the situation irrespective of our political affiliations. Those that will feel the effect of this sit-at-home order most are the aged, physically challenged, widows and widowers, who are sole breadwinners of their families, artisans who are dependent on daily earnings.”

Jegede appealed to the well-to-do in the society to help the needy at this time, adding that this measure would be a way of showing good faith and affection to the people who have been asked to stay at home on safety grounds.

But for Governor Akeredolu, the setting up of the committees, first the Palliative Committee, was as a result of outcries from the people to emulate his counterparts in Osun and Lagos States, while the Fund-raising Committee came later to diffuse the arguments on the former. He set up the 19-man committees, later expanded to 21 members, opened separate account numbers with some banks to be managed by a private firm, which further strengthened the waves of criticisms against the governor.

Akeredolu suffered strictures of criticism due to membership of the committees, which many people have adjudged to be the worst, compared to the calibre of people who make up such committees in neighbouring states, which are largely devoid of party affiliations and religion. The main objection was made against the inclusion of one of the governor’s sons, Mr. Babajide Akeredolu, as Secretary of the Fund-raising Committee.

People had expected that illustrious sons and daughters of the state like the founder of Synagogue Church of All Nations (SCOAN), Prophet Temitope Joshua, Senator Femi Farukanmi, and founder of Elizade Motors, Chief Michael Ade Ojo among others would make the list.

A public and political analyst, Mr. Wande Ajayi, kicked against the module put in place by the state government to alleviate the stay-at-home order, noting: “Dear Nigerians, please do not send a kobo to these accounts. It’s a conduit pipe laid by the governor to enrich his family and party faithful. If you have anything to give us in Ondo State, give it to NGOs who will do more justice to the monies than our governor who made his son secretary of the palliative committee.

“If you think this is about politics, investigate the members of Ondo State COVID-19 Palliative Committee. They are all politicians that belong to Akeredolu’s faction in Ondo APC. If at all they will be sharing anything, it will be only to his party faithful and not to the entire citizenry.”

While reacting to the volley of criticisms against the committees, the Special Assistant to the Governor on New Media, Mr. Olabode Olatunde, said: “When has it become an offense to put competent and passionate people in a committee inspired by their relentless efforts?

“Because he is a governor’s son now, we must demoralise him even if he is running up and down to get this committee working and drive result. This is a time we should put on hold all unnecessary sentiments and let’s think about saving lives. This is a commendable action; let’s drop the childish acts.”

It was gathered that the governor did not wanted to over-labour anybody with the task of raising mony, which Akeredolu also confirmed in a state broadcast on Saturday. His original plan was to raise money from the government treasuries to cushion the effects of COVID-19.

Riding on the crest of the palliative waves like other governorship aspirants, Prince Dapo Adelegan, a prospective governorship aspirant in the ruling party, has mapped out strategies to empathize with Ondo people on COVID-19 travails. While joining forces with the state government and other stakeholders to educate the people, his political team has begun enlightenment programmes on radio and other mass media outlets on safety and precautionary measures.

Adelegan, who is also the President of Nigerian British Chamber of Commerce, is said to be favourite of the Abuja caucus of the party to replace the incumbent governor in the next governorship election in the state. A close source within his campaign organization, Mr. Tope Akinfotire, revealed that a palliative committee has been set up and huge sums of money have been earmarked to procure relief materials and food for the people across the 203 wards of the state.

According to him, the distribution, as a way of showing empathy and compassion for the people, will begin in Owo Local Government Area, which is also Akeredolu’s council.

“This is the most trying period for people of Ondo State and Nigerians at large,” Akinfotire stated. “Devoid of politics, we are identifying with the people, because we feel their pains and hardship, and we cannot afford to be insensitive to their plight.

“It is our maxim that we make a living by what we have but make a life by what we give. This is the time to be the Good Samaritan to our brothers and sisters assaulted by poverty and lack; there is no better time to preach the gospel of love.”

Akinfotire noted that his boss, Adelegan, like some other well-meaning Nigerians, has been appealing for collaborative efforts with the state and federal governments to put smiles on the people’s faces.

However, there were rumours that the local government election, which was slated to hold on April 18, 2020, has been cancelled due to the coronavirus pandemic. The Ondo State Independent Electoral Commission (ODIEC) said this was not true. The ODIEC Director of Media and Publicity, Mr. Rotimi Olorunfemi, in a statement a few days ago, attributed the rumour to some mischief-makers whom he accused of deliberately misleading the public.

Olorunfemi, however, affirmed that there was a suspension of the poll due to the government’s directives on COVID-19, which, no doubt, would inevitably change the local government election date. He expressed the readiness of the commission to conduct the election after the nation has been declared free of the pandemic, adding that all the logistics needed for the poll are ready.

According to Olorunfemi, “The conduct of the 2020 local government elections in Ondo State therefore becomes invariably inevitable, but at an appropriate date to be announced by the commission after due consultation with relevant stakeholders and political parties as agreed at a recent meeting.”