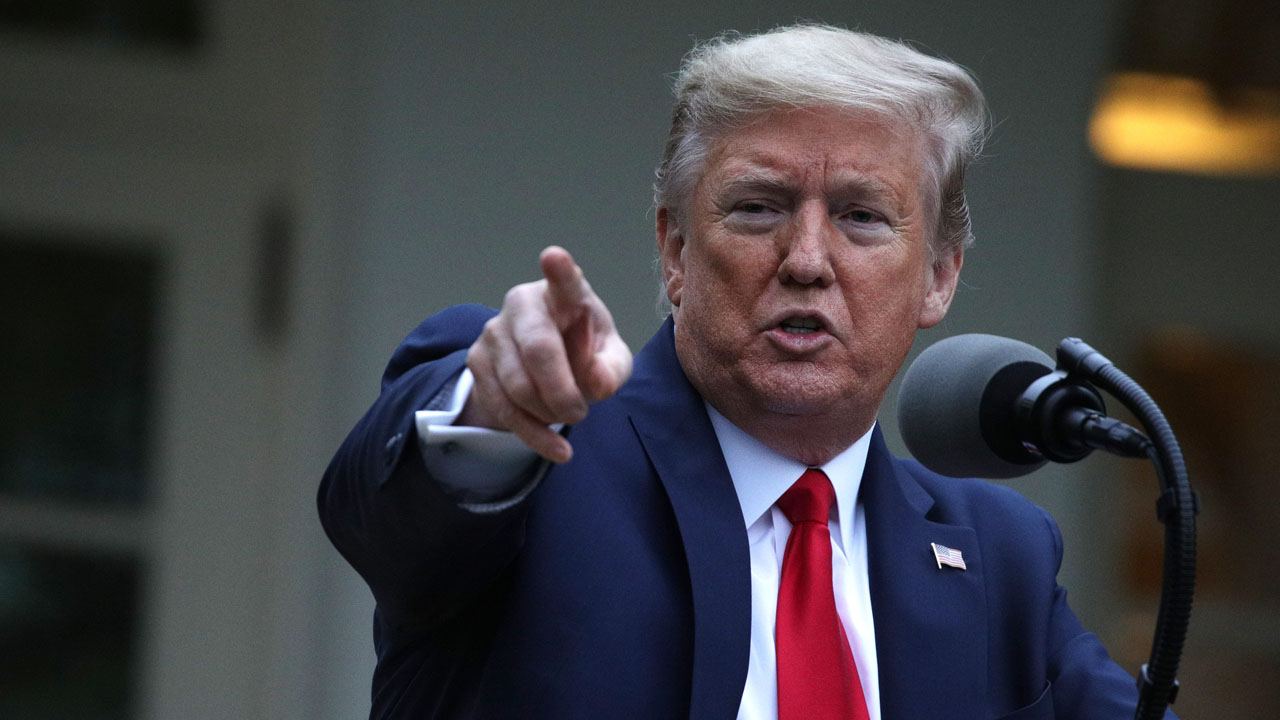 WASHINGTON, DC – APRIL 14: U.S. President Donald Trump speaks during the daily briefing of the White House Coronavirus Task Force in the Rose Garden at the White House April 14, 2020 in Washington, DC. President Trump announced that he is halting funding for the World Health Organization WHO. Alex Wong/Getty Images/AFP

Donald Trump ordered a freeze on funding for the World Health Organization for “mismanaging” the coronavirus crisis, as world leaders weighed easing lockdowns that threaten to tip the global economy into a second Great Depression.

The death toll from the pandemic has topped 125,000, with nearly two million people infected by the disease that has upended society and changed lives for billions confined to their homes around the globe.

World leaders are agonising over when to lift lockdown measures to jump-start devastated economies but still avoid the second wave of infections.

And with the world battling to get on top of the pandemic, the US President fired a broadside at the WHO and halted payments that amounted to $400 million last year.

Funding would be frozen pending a review into the WHO’s role in “severely mismanaging and covering up the spread of the coronavirus,” said Trump, who accused the Geneva-based body of putting “political correctness above life-saving measures.”

The outbreak could have been contained “with very little death” if the WHO had accurately assessed the situation in China, where the disease broke out late last year, charged Trump.

He earned a rebuke from the head of the UN and entrepreneur Bill Gates who tweeted that cutting funding was “as dangerous as it sounds.”

The president’s controversial attack came as the US counted a record of 2,228 victims over the past 24 hours, according to Johns Hopkins University.

Nevertheless, Trump vowed to reboot large sections of the world’s top economy “very soon,” saying the US would reopen “in beautiful little pieces”, with the hardest-hit areas such as New York taking slightly longer.

The International Monetary Fund laid bare the scale of the economic catastrophe, saying the “Great Lockdown” could wipe $9 trillion from the global economy in its worst downturn since the 1930s Great Depression.

The virus-hit Chinese economy, second only to the US in size, likely contracted for the first time in around three decades in the first quarter, according to an AFP poll of economists on Wednesday.

‘Open in a desert?’
With tentative hope the pandemic could be past its peak in some European hotspots, many countries are gradually lifting restrictions — to mixed reception.

Italy, one of the hardest-hit nations, allowed bookshops, launderettes, stationers and children’s clothing retailers to re-open, but many business owners chose to stay shut.

“Open in a desert? Why? Opening a business where no one walks by is dangerous from every point of view,” said Cristina Di Caio, a bookshop owner in Milan.

Spain has allowed work to restart in some factories and construction sites, Denmark opened schools on Wednesday after a month-long closure while Germany was expected to ease some lockdown measures.

Also Wednesday, the European Union is poised to suggest a coordinated “road map” for member states to exit the lockdown.

‘Unenforceable and unsustainable’
Citizens elsewhere, however, braced for several more weeks of restrictions — including in India, whose 1.3 billion people will remain in lockdown until May 3 despite uproar from millions of unsupported poor.

As the virus appeared to be on the retreat in some parts of richer Europe, it is slowly taking hold in Africa, which has seen 15,000 cases and 800 deaths continent-wide — with fears over growing hunger and possible social unrest.

“A lockdown is unenforceable and unsustainable across much of Africa,” said Jakkie Cilliers at the Pretoria-based Institute for Security Studies (ISS).

“You are trying to do something that is not possible, and you are condemning people to a choice between starving and getting sick,” he said.

“It’s not possible for 10 people living in a tin shack… to not go outside for three weeks.”

A similar crisis is emerging in Ecuador, where hunger trumps fear of the virus for residents in rundown areas of the badly affected city of Guayaquil.

“The police come with a whip to send people running, but how do you say to a poor person ‘Stay home’ if you don’t have enough to eat?” said Carlos Valencia, a 35-year-old teacher.

However, in parts of the world that saw early outbreaks, things were gradually returning to some semblance of normal — South Korea headed to the polls Wednesday with a big turnout expected despite the disease.

Examples of human resilience and generosity continued to lift the spirits.

While a 99-year-old British World War II veteran raised millions for health workers by walking lengths of his 25-metre garden using a strolling frame, a man of the same age beat the virus in Brazil.

“It was a tremendous fight for me, greater than in the war. In war, you kill or live. Here, you have to fight in order to live, and you leave this fight a winner,” said Ermando Piveta.