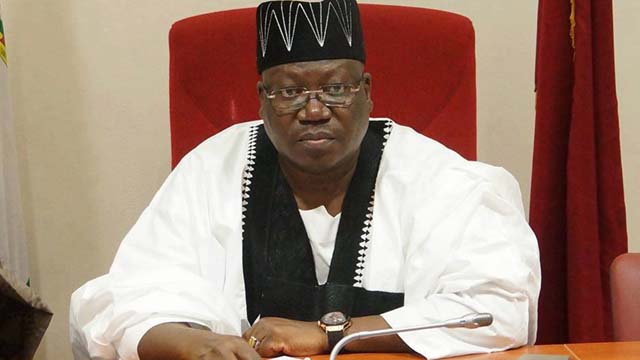 Has the National Assembly succumbed to and chickened out of its earlier avowed commitment to fight against what it called impunity, lack of transparency and multiple fits of abuse in the National Social Investments Programme (NSIP), which the federal government has insisted on applying to the provision of palliatives to Nigerians to cushion the effect of COVID-19? And what is the fate of the N10.594 trillion 2020 national budget in the face of the terrible economic onslaught by the deadly COVID-19 pandemic? What is the outcome of the series of meetings between the leadership of the National Assembly and economic eggheads of the executive arm of government since March 2020 when the slump in the prices of crude oil in the international market became obvious?

These questions have become germane in view of the sudden graveyard silence after the acrimonious legislative/executive meetings on how the executive could utilize available funds to cushion the harsh economic effects of the pandemic. Aside the serious allegation of widespread abuses in the application of NSIP through which the federal government is sharing palliatives, there is the other big question that relates to the legality or otherwise of spending monies raised by or donated in response to COVID-19 to the federal government without being appropriated by the National Assembly.

The first two weeks of the lockdown were spent by the leadership of the National Assembly and relevant organs in the executive arm in serious talks and debates on how, for instance, the N500 billion the federal government intended to raise to provide the palliatives would be sourced and spent. There were also talks about the need to immediately rejig the 2020 National Budget of N10.594 trillion which was based on an oil benchmark of $57 per barrel to a more realistic size following the free fall in the price of crude oil in the international market that now stands at less than $20 per barrel.

The crucial meeting which took place at the National Assembly was between its leadership and the Minister of Finance, Budget and National Planning, Mrs. Zainab Ahmed, Minister of State for Petroleum Resources, Chief Sylva Timipre, Governor of the Central Bank of Nigeria (CBN), Mr. Godwin Emefiele, and other top government officials on the state of the economy and the planned review of 2020 Budget. It was then learnt that the National Assembly was to reconvene to consider a downward review of the budget in view of the slide of oil in the international market.

Analysts have, however, advised the federal government to disclose sectors and line items to be affected by the planned N1.5 trillion budget cut. It was even reported that the presidency had prepared a supplementary budget, which is intended to present to the two chambers. The proposed budget review was said to have been based on a new oil benchmark of $30 per barrel unlike the $57 benchmark used for the 2020 budget passed by the National Assembly last December.

The benchmark issue, a Senator later disclosed, was supposed to be subject to market forces as the price keeps crumbling. After all the games of wits, exchange of words, intrigues and political manoeuvre, virtually all the stakeholders have resorted to keeping mum. The last that was heard was when the Senate President, Ahmad Lawan, and House of Representatives’ Speaker, Femi Gbajabiamila visited President Muhammadu Buhari and later assured journalists of the commitment of the National Assembly to reforming the NSIP through legislation.

Lawan, who spoke to journalists after the meeting at the State House in Abuja, reiterated the call for reforms in the social investment initiatives, saying it was the right time to evaluate its progress since its introduction in 2016.

He said, “This afternoon, we had an engagement with Mr. President to discuss with him what we, the leadership of the National Assembly, have resolved and our opinion on various issues regarding the fight against COVID-19 in Nigeria and going forward. We also believe that it is time to reform the way and manner we implement the Social Investments Programme. This is a very important programme that is to help Nigerians who are poor and vulnerable.

“We believe that having implemented this programme from 2016 to date, we should be reviewing it to see and evaluate the efficacy and efficiency with which we have been implementing this programme.”

At the peak of the hostile exchanges between the two arms of government, Lawan and Gbajabiamila did not spare those managing the programme. They were informed of the programme’s shortcomings at a meeting with the Minister of Humanitarian Affairs, Disaster Management and Social Development, Hajia Sadiya Umar Farouq and some top officials of the ministry.

The National Assembly’s leadership called for immediate suspension of the register used for the scheme when informed by officials who accompanied the minister to the meeting that some N12 billion was paid monthly for the school feeding programme which nobody had been able to verify.

Another issue that attracted the anger of the lawmakers was the sum of N100 million paid monthly to an unnamed consultant who handles some aspects of the programme. Mrs. Farouq, it was learnt, told the National Assembly leaders that she inherited the mess since it was transferred to her ministry. The minister was said to have told the lawmakers that she did not understand why the school feeding programme was adopted for COVID-19 and that other programmes have so many inadequacies that her ministry was still trying to unravel.

And President of Senate, Lawan, struggling to contain his anger, had said: “The way the poverty list was generated has raised all types of problems here. No one believes in the social register. Its a fraud and not fair”.

He stated further that the National Assembly was concerned about the conditions and guidelines for the intervention programmes, which are specifically directed at the most vulnerable Nigerians.

“In fact, many of them don’t even have phones and these are the poorest of the poor. Yet, some of the conditions or guidelines which you set inadvertently leave them out. The time has come that we review the ways and manner we use to deliver the services under the SIP to Nigerians. We need to be better in terms of strategy for delivery and, definitely, what we have been doing in the past cannot deliver exactly what will solve the challenges of the most ordinary and most vulnerable Nigerians.

“So we need to put on our thinking cap and work out some strategies on how to identify the poorest persons in Nigeria. I think we have not been able to reach far out there to get them properly captured.”

In the same vein, Speaker Gbajabiamila also weighed in when he said: “Your job right now is probably the most important as we speak because you are saddled with the responsibility of alleviating ‘poverty’ or the hardship due to no fault of anyone, being thrust upon Nigerians. And I know that you came into a system, or you get a system that has nothing to do with you, but what we will be asking you to do is for you to change that system.

“When you walk into a system, no system is 100 perfect. The word ‘reform’ is something we use all the time, and this is the one time when that word ‘reform’ must be used in the truest sense of that word.

“But if they ask me, as the Speaker of the House, or ask the Senate President or any of my colleagues here, we are going to be struggling for answers. If we were really representing, then we will not need to ask, because we will have the answers.”

However, Special Adviser to the President on Social Investment, Mrs. Maryam Uwais, came up with a response the National Assembly later described as ‘unfortunate, baseless, and unfair.’ She refuted allegations that as part of the conditions for poor and vulnerable beneficiaries to be engaged, they are made to apply online, through the Internet and they require a BVN for payment.

“The National Cash Transfer Programme derives all the cash transfer beneficiaries from a National Social Register (NSR), comprising State Social Registers that are developed and hosted by the states’ ministries of panning of each state.

“The process for objective identification of poor and vulnerable households is as provided in the Financing Agreement (FA) signed between Nigeria and the World Bank, for which purpose the World Bank IDA Credit and the recovered funds from the Sani Abacha family are being utilised.”

She described as untrue the statement by the leadership of the Senate that the NSIP information was not accessible to the National Assembly, stating that all invitations to public hearings and meeting by the parliament were honoured by herself and the cluster teams. She said documents relating to the structure, activities and progress of NSIP were routinely shared with them, over the period that the NSIO supervised NSIP under the auspices of the Office of the Vice President.

“Furthermore, the monthly reports of 3,000 N-Power monitors, spread across the 774 LGAs, are available to both Poverty Alleviation Committees of the NASS,” she added.

On the claim that beneficiaries were not known personally to the NASS members, and that the National Social Register (NSR) is a ‘scam’ and needs to be reformed through a process that is ‘more inclusive’ of the parliament, she described it as “regrettable and dangerous.”

According to Uwais, “The NSR comprises persons selected by the communities directly, within the constituencies of each of the NASS members. No person has been imported from one community to the other. They have been identified as very poor by the communities in which they reside and may not necessarily be known by the lawmakers.

“It should be noted that Nigeria has signed a Financing Agreement with the World Bank, in which the process of identification of beneficiaries was set out. Any departure from the process, which would place at risk the accessibility to the IDA Credit and the recovered funds from the Abacha family.”

She stated that NSIP has been handed over to the Ministry of Humanitarian Affairs since October 2019, but it had become necessary to respond to what she described as the unfortunate allegations made at the National Assembly on the 7 April 2020, which allegations were made in respect of certain aspects of NSIP from inception in November 2015 to September 2019.