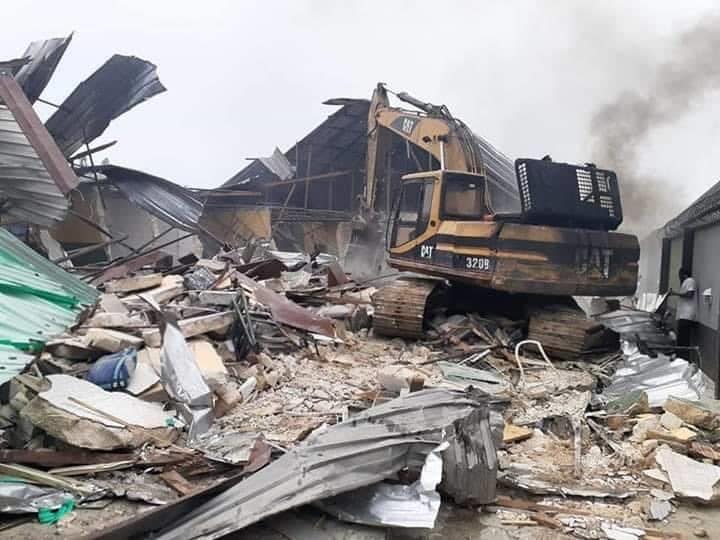 The total lockdown in Obio-Akpor and PortHarcourt Local Government Areas in Rivers State entered another dimension yesterday, as the State Governor, Nyesom Wike, personally monitored the demolition of two hotels in Eleme Council for allegedly flouting the state Executive order.

The demolished hotels are the Prudent Hotel, Alode, in Eleme and Etemeteh hotel in Onne .

The Governor had on May 5, 2020, charged government recognised traditional rulers to set up Task Force in their respective communities to enforce the closure of markets, hotels and beer parlours across the State.

Also, on May 7, while inaugurating the State COVID-19 local government Task Force, Wike urged them to identify hotels still operating during the lockdown and erring beer parlours for demolition.

Wike said, “From tomorrow, move in. Any hotel that is operating, identify it and we will bring down the hotels.

“ I have the political will. Those people who disobey ,will face the consequences “ However, on Saturday the governor announced the names of the two hotels, declaring that they would be demolished for flouting the State Government Executive Order 6.

The Executive Order 6, is said to have banned the operation of hotels across the 23 Local Government Areas of the State.

The Guardian gathered that the governor had drove from Port Harcourt to Eleme with other convoys and monitored the demolitions of the hotels from the beginning to the end.

He told newsmen that the law must be obeyed, hence the State Government’s decision to enforce it.
But residents in the State have criticized the governor’s action, describing it as impunity and worse than the military regime.

Some human rights activists who took to the social media, described it as wickedness, sad development in the State, adding that the owners of the hotel should have been given fair hearing.

One of the activists, Chinedu Uchegbu insisted that it was wrong for the governor to act on hear-say, without concrete evidence that the hotels operated during the lockdown.

He maintained that the owners would have been given the opportunity to speak.

Uchegbu said, “The announcement about the offence was made on Saturday and by today (Sunday) under a window of 12 hours the sanction has been executed.

“If I may ask, who tried the offenders? Is demolition the only punitive sanction? If the owners of the hotel were operating in violation of the lock down, wouldn’t have been better to stage a sting operation and catch them red handed so as to punish the culprits”.

“Later the same people will be mouthing gibberish about people de-marketing the state. What can be worse for business than a state that advertise scant regard to right to private property. Quite a pity that people are not rising up to condemn this descent into utter absolutism”.

However, addressing journalists after the demolition, Wike said: “Government has no alternative but to apply the Executive order which I signed before the lockdown of Obio/Akpor and Port Harcourt. I called all the Traditional Rulers and Council Chairmen and told them to ensure that no hotel operates in the State.

“We are not saying it will be forever. This is for now, so that we know where we are. To reduce the cases and check the spread.

“Whether you are PDP or not, all we are saying is that nobody is above the law. If we can do this to a PDP person, then you know we are not discriminatory. Everyone must obey. Whether you are in PDP, SDP or no party, you must obey the law. If any other person does the same thing, the same rule will apply. “
Governor Wike reiterated his declaration that no hotel should operate anywhere in the state.

“We said no hotel should operate within this period. Unfortunately, the PDP Youth Leader in Eleme joined others to flout the Executive Order. Therefore, the executive order will be applied.

“We said if any hotel operates, the Government will bring down that hotel. We are doing what we have told people that we are going to do.

“Nobody wants to obey any rules. We are saying just for now, keep off, let us see how we can keep our people safe”, he said.

The Governor said that the focus on hotels is due to the fact that one of the cases in the state spread the virus from a hotel.

He said: “Look at the rate of infections, most of these people are found in hotels. Look at the man that died, he was at Mingi Hotel in Rumumasi. Due to that contact, we have had other seven cases.

“People should help us and support Government for Rivers people to be safe. Security Council will meet to review the strategies and achievements or setbacks, moving forward.

“All we are doing is to protect our people. Some people may not like our strategies, but our objective is to achieve results. “

He assured that the State Government will always continue to protect the people. He said the fight against the spread of coronavirus is serious, that is why he is leading it personally.

“People talk about hunger. But it is only a living person that can discuss hunger. We will continue to work to protect our people.

He said those involved in the crime will be prosecuted. He said that the Managing Director of the hotel at Onne has been arrested.

Efforts to speak with the owners of the hotels were futile as their contacts were not received as at the time this report was filed.