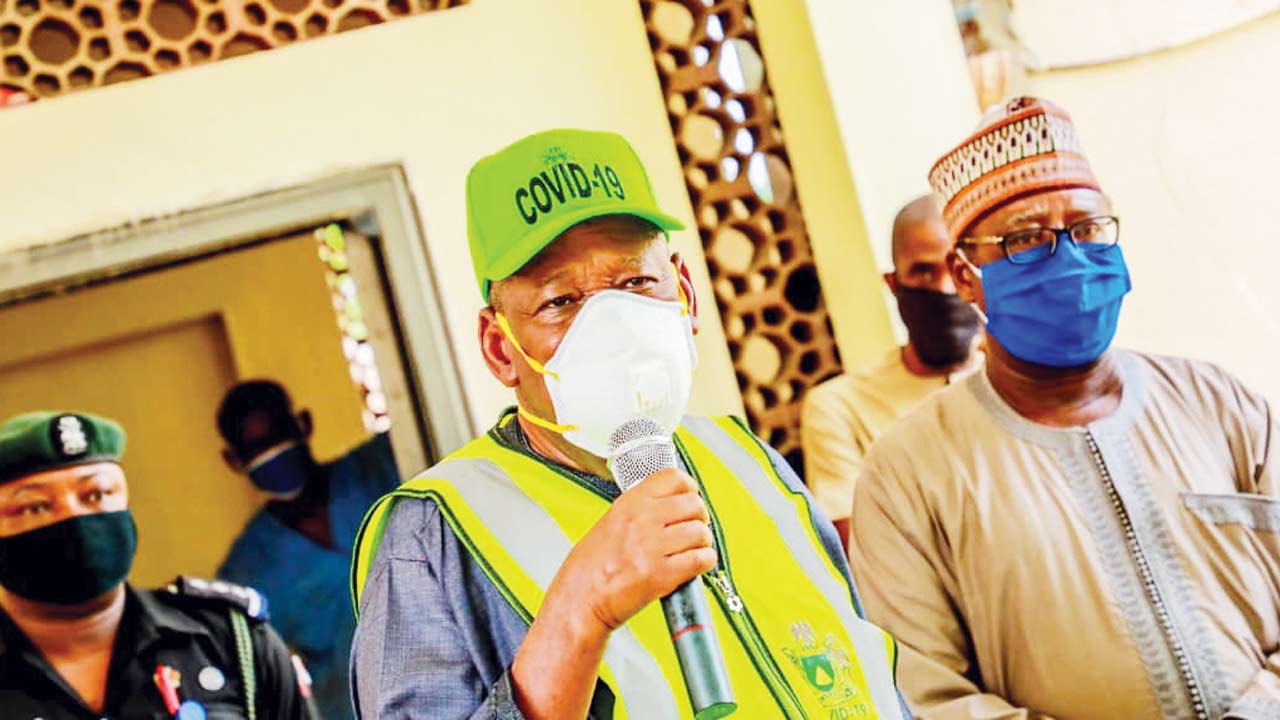 Kano State Governor, Dr. Abdullahi Ganduje (left), during the visit to the 80-bed Abubakar Imam Urology Centre and 100-bed Daula Hotel, which will be converted to isolation centres to cater for COVID-19 patients in the state…at the weekend.

Kano State Government has cautioned Northern governors against playing politics with the coronavirus disease (COVID-19) and future of almajiri children in the region.

Governor Abdullahi Ganduje, at a media briefing on COVID-19 in Kano, accused some of his colleagues in the region of embarking on political mischief, taking undue advantage of recent inter-state migration of almajirai in the North.

On the discovery of positive cases among almajirai deported from Kano to other states, Ganduje said: “What those children need is care and not publicity.”

Hundreds of almajirai, who were returned to their states of origins from Kano, were confirmed positive for COVID-19.

Ganduje stressed that Kano also had fair share of positive cases brought back from other states, but decided to restrict them to isolation centres instead of joining issues with anybody.

However, the state government is worried over poor compliance to the presidential lockdown order, holding security operatives liable.

The governor also cautioned clerics planning to observe Friday congregation prayers to desist in their own interest.

Meanwhile, the Nasarawa State government has said that 100 almajirai from Bauchi, Kano, Kaduna and Jigawa states have been received and quarantined.

The Commissioner for Information, Orientation and Culture, Mr. Dogo Shama, told The Guardian that the almajirai were officially received and quarantined to ascertain their health status before they could be reunited with their families.

Shama, however, stated that the 79 almajirai who were initially rejected by the Taraba State government had been reunited with their families in Taraba.

But Kaduna State-based Islamic cleric, Muhammad Ashafa, and other leaders are backing the ban on the almajiri system in the North, saying it is out of fashion and should be extinguished.

“It is unfortunate that people could born children that they cannot cater for their wellbeing and education,” Ashafa said during a forum with journalists in Kaduna at the weekend.

The Co-Executive Director with the Interfaith Mediation Centre (IMC), Kaduna State, remarked: “I support the government directives for shutting down of worship places. During a pandemic in Syria, and Baghdad in Iraq, all worships places were shut down by their authorities.”

Similarly, participants at the IMC Monthly Forum with media on Peace Journalism also lamented the increase in crime rate in Kaduna and the country at large despite COVID-19 pandemic ravaging the country.

The forum, at the end of its three-hour meeting on Saturday expressed surprise over series of reports about attacks, killings and kidnapping by bandits and gunmen, as well as herders/farmers clash in Kaduna and other states despite the COVID-19 lockdown.