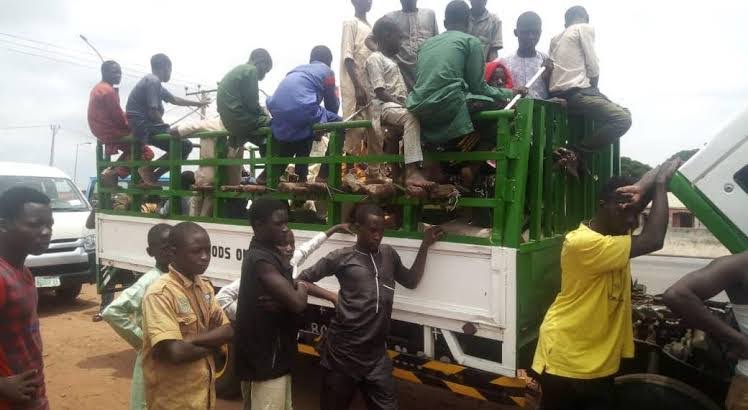 Almajiri is a system of Islamic education practiced in northern Nigeria it is also the name for a young boy who is taught within this system (plural almajirai).

The Hausa Almajiri is derived from the Arabic word (Al-Muhajirun ) which refers to a person who migrated his home in search of Islamic knowledge.

But the word of Al-Muhajirun is is going to a person who migrated from one place to another like someone migrated from Nigeria to London he is Muhajir in Arabic word.

Colloquially, the term has expanded to refer to any person who begs on the streets not only the young boys that are sending by their parents to seek for Qur’an education it’s also go to people with disability who also when to the streets to begs for money or food eat daily basic.

Many Muslims in the world give ‘Sadaka’ to almajirai on daily basis seeking Divine reward and protections are the children or the people with disabilities around them.

Back to Almajirai: Almajirai are children, usually from poor rural backgrounds, who leave their hometowns to study Islamic learning with Tsangaya Islamic School where Qur’an was teach by the Mallam or Aramma, which most of them were educated in the alamajiri system themselves, and as they do not receive a salary but depend financially on the alms of the community and the work of the almajirai.

The Children begin their Qur’an lessons usually from ages of 3 and 12, in Islamiyya schools or Tsangayu, which they come from the parent house to the school study and go back home daily most of them at 9 to 18 years of age the use to Crimean the hold 60 vessel of the Qur’an, but like other children send to at age of 7 or 8 to another town pair way from the home town the lucky once they are they once memories the all 60 vessel of Qur’an in their early twenties, but some spend all their lives without memorizing the Qur’an ended as press-Singers or to be part of criminals groups around.

Almajiranchi was not originally part of the almajirai system, but it is now said to prepare the almajirai for the hardships of life, make them strong and humble, and keep them devoted to studying the Quran. The practice of alms begging is widely denounced as child abuse in Nigeria.

In one study of almajirai in the Gombe State 38% of boys surveyed said they were tired all the time, and 62% reported feeling hungry. In the same study, 88% of almajirai said they spend most of their time begging. Some Muslims criticize this practice, as begging is generally discouraged in Islam. Moreover, the conditions that almajirai live in are often unhygienic and not conducive to their health.

The almajiri system is often attacked for promoting youth delinquency and violence and for providing street gangs and Boko Haram with an ample supply of vulnerable young recruits.

People believe that the almajiri system fuels Boko Haram because 1) the children are radically indoctrinated and manipulated by their Quranic teachers and 2) the children are economically disadvantaged and live without their parents, which makes them easy targets for recruitment. Some say that Boko Haram would not exist with almajirai, while others say there’s no evidence that Boko Haram recruits from almajirai systematically more than they recruit from any other vulnerable youth demographic in Nigeria.

Additionally, since the almajirai do not receive a secular education (math, science, English, etc.), they are often unequipped for professional jobs.

Because almajirai beg on the streets and are seen by some as unproductive to society, the children face widespread stigmatization: some consider them to be “the butchers of Nigeria,” “urchins” and “nuisances.”

Some still consider the almajirai system to be a legitimate, time-honored way to teach children the Quran and Muslim values. Many almajirai consider themselves to be humble and devoted scholars searching for the most holy knowledge.

Several Sunnah encourage the seeking of Islamic knowledge, such as “Seeking knowledge is a duty upon every Muslim” (Vol. 1, Book 1, Hadith 224) and “Whoever goes out seeking knowledge, then he is in Allah’s cause until he returns” (Vol. 5, Book 39, Hadith 2647). Supporters of the almajiri education system believe that it teaches children to be pious, moral, and beneficial to society.

Additionally, some say that there is no evidence that Boko Haram or other violent groups recruit from almajirai more than any other cohort of disadvantaged youth.

Deportation of Almajiris from state to state:

After prolonging issues on Almajirai Education System, the Governors under the aegis of the Northern Governors’ Forum (NGF) had issued a statement where they “discussed the risk that Almajiri children are exposed to due to the virus. They unanimously decided to ban the Almajiri system and evacuate the children to their parents or states of origin.

In Gombe state, the state government had transported over 700 of them to their respective states while other states were also sending back these Almajirai who have become a point of reference for public discourse as to how they are also feeling as human beings and Nigerian children.

According to an Islamic cleric, Mallam Auwal Umar, said these Almajirai have rights to life as well as care as the concept of Almajirai does not permit parents to send out their children on the ground of not being able to carter for them.

He stated that every child is from Allah who mercifully gives as He wills and every parent must have to give account for the children they brought to the world and if that had been borne in mind by all parents, the number of Almajirai we have on the streets would not have been as large as we now have them.

He added that the Almajiri concept was to ensure that children or students got sound Islamic doctrinal training and any movement should be based on knowledge seeking and not for other purpose which according to him have been abused to suit personal interest especially of parents.

Our correspondent who went round observed that Almajirai around Gombe Metropolis and suburb now take to their heels whenever they cite any police patrol van in their domain for fear of being deported within their own country.

Ahmed Sani, one of the Almajiri who came in from Jigawa State through his father’s friend said he was not happy to be back to his state because of the kind of treatment he was receiving at home.

“I have been home now for 10 days and I am not finding it easy here because my father has three wives and more than 12 children. We don’t often get much to eat and the younger ones would have to be fed before it could get to our turn.

“Sometimes the harsh nature of our polygamous family in our home makes me wish I were in Jigawa State,” he lamented.

The 11-year-old boy said while in Jigawa he was helping some farmers in their rice farms where he made some stipends to feed himself and save for other expenses.

He called on the state government to look into the plights of Almajirai, adding that if they were well taken care of by going to school and getting the necessary treatment, they will grow up to also contribute to the good of the society.

Speaking to our Correspondent the Chairman of Association of Non-Governmental Organisation Gombe state, Ibrahim Yusuf said the problems is absence of social security that promotes the Almajiri proliferation in the region and institution is exploited by the so called politicians where they are forced to recite the Holy Qur’an or any holy names of Allah to pray for them on their success

“So very few from the Sheikhs are making money out of it, and lack of knowledge, information, negligence, poverty, parental guidance etc making a lot of people producing children that they cannot cater for and misconception of religious beliefs.

He said that the governments are not ready to enforce the issue of compulsory education on any child/family/household, adding that lack of succession plans from the artisans in the community.

According to Goni Abdulrazaq (not real name) a proprietor (Alaramma) of an Almajiri schools in Gombe metropolis the Federal Government’s initiated plan to integrate the Almajiri system of education into western in another approach to help the children explore their potentials to the fullest that was adopted by Gombe state government is nothing but a fraud that have enrich some individuals in the past 7 years that it was launched.

He alleged that out of the 11 schools that built Gombe state government no one belongs or is given to a proprietor of a real Almajiri school.

“Most of the schools commissioned are either Islamiya School or Zawiya”

He explained that an Almajiri Shool (Tsangaya) is a place where children are brought mostly from far to acquire Qur’anic knowledge while Islamiya are schools owned by individuals or group and are mostly populated by children from within the area that the school is established.

“We and the Almajiris were somehow disassociated from the program that is called and launched as the Almajiri system of education”.

“We have about 1,477 Almajiri Schools across Gombe state where children come from states within North to acquire Islamic Education.

And no one of these schools has been assisted or supported even with the program that was said to be aimed at build an integrated model schools in a bid to modernize Almajiri Education system in the north”. Goni Abdulrazaq laments.

However, is said the request by about 33 Almajiri is said to be working on by Universal Basic Education Board SUBEB and they hope that will work out and bring about the end begging on the streets as well as the falling prey to all manner of inhuman treatment that there boys, the Almajiris are at risk of.

SUBEB told Bounce News the program in Gombe state is yet to be fully functional as out of all the built by The Universal Basic Education Commission UBEC only 5 have been commissioned and that SUBEB have forwarded all the 33 request received in the past 6 months to UBEC who is normally fund the establishment of the schools.

“Nothing is without some hiccups but we are working hard to make sure of universal coverage the whole of Gombe state”.

“I think it is our responsibility, we the stakeholders including the owners the those almajiri schools that is the Alaramma to seat, discuss and help these children who are rooming the street, because they are very intelligent, whenever you engage one of them on the street in a discussion you will get to know that they are gifted and should be helped”.

The state Commissioner of Education, Dr. Habu Dahiru told our Correspondent that the received about 57 Almajirai from other state and they isolated them.

He said the present administration concluded plant on the all indigene Al-majirai to integrate them to Almajiri system of education under Better Education Service Delivery for All, BESDA, adding that over 70, 000 tsangaya learners are currently benefitting from the intervention programme.

The Commissioner solicited the support and cooperation of Islamic scholars towards the success of the programme, saying it is the right of every child to have better and quality education which is the key to socio-economic transformation of the society.

He said that, repatriated Almajiri children from Kano State 8 out of 48 are tested positive of active COVID-19