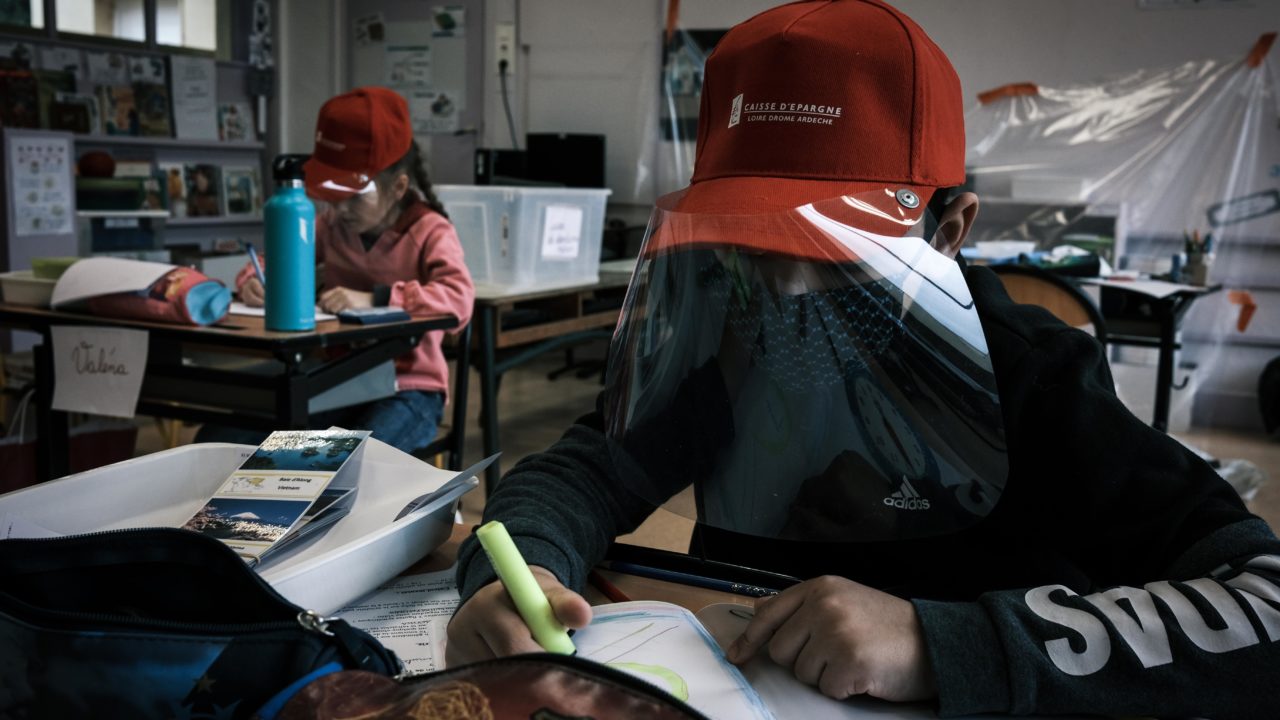 Primary school pupils attend a class wearing protective visor caps made by the city council in La Grand-Croix, near Saint-Etienne, central France, on May 12, 2020, two days after France eased lockdown measures to curb the spread of the COVID-19 pandemic, caused by the novel coronavirus. (Photo by JEAN-PHILIPPE KSIAZEK / AFP)

Thousands of schools reopened throughout France on Tuesday as the government eases its coronavirus lockdown rules despite some fears of a second waves of infections.

According to official figures there were 348 new COVID-19 deaths on Tuesday, bringing the national total to 26,991.

Primary and nursery schools reopened however, with teachers wearing face masks and the children’s chairs separated to avoid spreading the disease.

For Gregory Bouvier, headmaster of a nursery school in Rennes, northwest France, it was all a bit “surreal”.

“It’s not part of a nursery school’s DNA to have the children spaced apart from each other remaining at their desks and not able to share things,” he told AFP.

Education Minister Jean-Michel Blanquer hailed the reopening, which will be rolled out gradually throughout the country, including Paris schools on Thursday, before some secondary schools resume lessons next week.

To ease the fears of parents concerned that the virus remains just a sneeze away, the government has given them the choice to allow their children to return to school or remain under lockdown at home.

Unions have criticised the decision to reopen the schools calling it “premature”.

Some scientists and parliamentary deputies have also questioned the decision.

France began easing its two-month lockdown on Monday, with residents able venture outdoors without filling in a permit for the first time in nearly eight weeks and some shops reopening their doors.

But officials are keeping an anxious eye on events in Germany and South Korea which have reimposed some restrictions as virus cases rose after they eased lockdown measures.