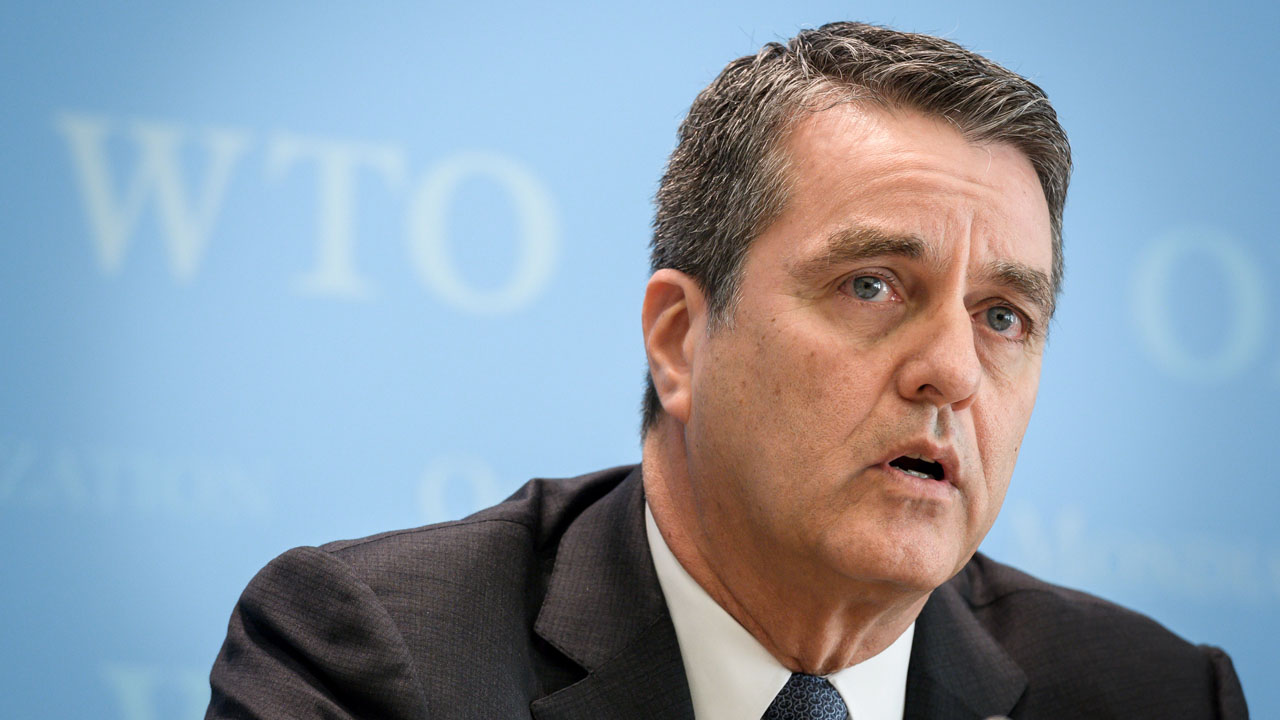 (FILES) In this file photo taken on April 12, 2018 World Trade Organization (WTO) director-general Roberto Azevedo gives a press conference at their headquarters in Geneva. – The World Trade Organization will make an announcement on May 14, 2020 about its Director-General Roberto Azevedo, a spokesman said, following reports that he is planning to step down before the end of his term next year. (Photo by Fabrice COFFRINI / AFP)

The World Trade Organization was expected Thursday to announce the early departure of its director-general, creating shockwaves at a time when the COVID-19 pandemic is ravaging the global economy.

Responding to questions about news reports that Roberto Azevedo was preparing to step down before his term expires next year, WTO spokesman Keith Rockwell told AFP that the global trade body “will have an announcement on this matter following the heads of delegation meeting” starting at 1400 GMT.

Several diplomats confirmed to AFP that they had been hastily called to take part in a meeting Thursday on “pressing administrative matters”, and several said they understood Azevedo’s future would be on the agenda.

And Azevedo himself appeared to confirm the information in an interview with Brazil’s main financial newspaper Valor Economico, insisting that moving forward his departure could avoid weighing down an important ministerial meeting next year with leadership discussions.

The 62-year-old Brazilian career diplomat first took the reins of the global trade body in 2013 and his second term is due to end in September 2021, but he acknowledged he might leave a full year earlier.

‘No good time’
“There is no good time for this type of thing,” he told Valor, adding though that it would be good to get a new management in place quickly to concentrate fully on a wide range of challenges facing the organisation and global trade.

Azevedo’s early departure would come at a time when the COVID-19 pandemic has pushed the global economy and international trade into turmoil, suffering downturns not seen since the Great Depression of the 1930s.

Global trade, already hit by trade tensions and uncertainties around Brexit, is expected to register “double-digit declines in trade volumes” in nearly all regions this year, the WTO said last month.

The 164-member organisation was meanwhile already in crisis before the pandemic hit, amid raging trade wars and as the United States under President Donald Trump has pushed for dramatic reforms of the Geneva-based body.

The WTO was, for instance, forced to put its dispute settlement appeal system on ice last December after Washington blocked the appointment of new judges, preventing it from reaching a three-judge quorum.

He pointed to “existing tensions, in particular the scathing criticism from the US president, violations of many agreements, the US-China trade war and the paralysis of the appeals body.”

He also lamented the many trade measures taken in reaction to the COVID-19 crisis, including a wide range of export restrictions.

Azevedo, who before his appointment as WTO chief spent five years as his country’s ambassador to the organisation, has enjoyed a reputation as a consensus-builder.

During his first term, he dedicated much energy to trying to unblock long-deadlocked trade agreements.

African candidate
The WTO has for nearly two decades failed to conclude the Doha Round of trade liberalisation talks.

However, on Azevedo’s watch, WTO members did finally conclude their first-ever multilateral agreement when they reached a deal in Bali in late 2013 on overhauling global customs procedures.

But countries have since then failed to reach any further multilateral agreements, including on fisheries subsidies, and since 2017 the WTO has struggled to deal with a US administration openly hostile to its multilateral approach.

If Azevedo steps down prematurely, WTO will likely be forced to rush through a usually drawn-out election period under less than optimal conditions, as the organisation struggles to navigate a new reality of online meetings and is still debating the possibility of virtual decision-making.

It remains to be seen who will take his place, but many observers are already betting on a candidate from Africa — and against a WTO insider.

Azevedo’s “insider” status “was not necessarily conducive to giving him true influence over the unfolding events,” Jean said.

“Azevedo’s mandate has rather been characterised by impotence to stop the destabilising tendencies” facing the global trading system, he said.

One diplomatic source meanwhile told AFP that there appeared to be a clear “consensus” that the successful candidate to take the reins at the WTO should not come from “a big economic power”, and certainly not from China or the United States, in light of their trade war.