This came as bandits on Wednesday reportedly killed eight people in a fresh attack on Gonan Rogo settlement in Kufana District, Kajuru Local Council of Kaduna State. The incident followed the killing of 17 persons a day before in the same village.

Responding, the police, in a statement by the command spokesperson, Mohammed Jalige, had sworn to apprehend the culprits.

But the President said Nigerians deserved a much more peaceful environment, promising that nothing would be left to chance in achieving the objective for the citizens. 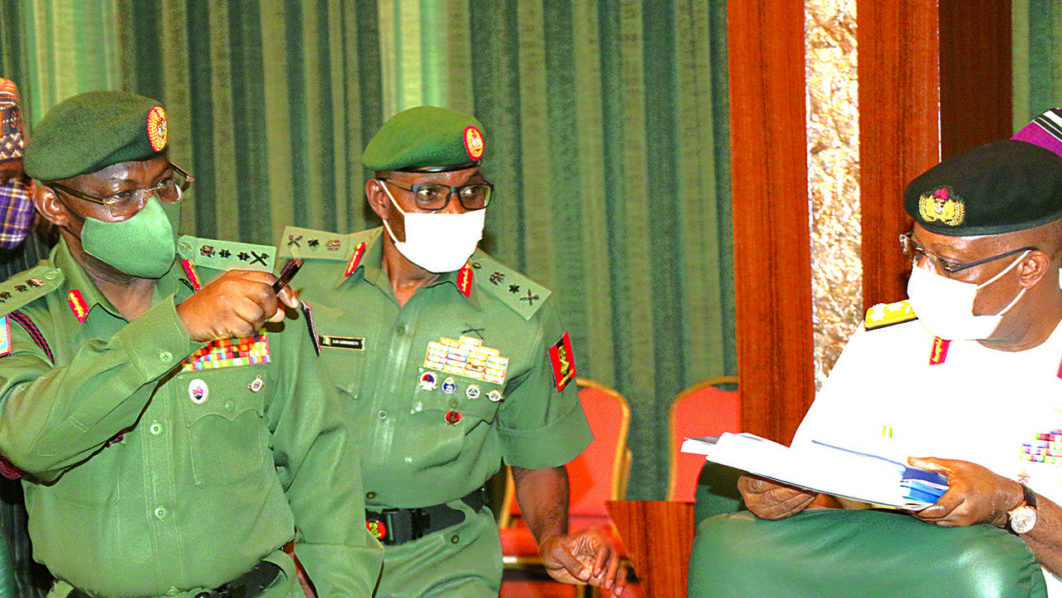 Buhari spoke at an extraordinary meeting of the National Security Council which held yesterday at the Presidential Villa, Abuja.

Addressing State House correspondents at the end of the gathering, National Security Adviser (NSA), Maj.-Gen. Babagana Monguno (rtd), said the council received a comprehensive brief from the Secretary to the Government of the Federation (SGF) and chairman of the Presidential Task Force (PTF) on COVID-19 on the gains made so far, highlighting areas of concern which needed urgent attention as well as make projections for the next couple of weeks.

Monguno said he also spoke in his capacity as the NSA, informing members on the insurgency in the North East, armed banditry and emergence of all kinds of non-state groups and actors in addition to kidnappings which have resumed frightening dimension in recent times.

In a related development, the Christian Association of Nigeria (CAN) has indicted the federal and state governments for the mayhems, claiming that there had “been no honesty and commitment in putting an end to the bloody crisis.”

In a statement after its emergency meeting, the state CAN chairman, Reverend Joseph Hayab, cautioned the President and Governor Nasir el-Rufai against complacency in the handling of the issue at hand.

He reminded the duo that “leadership is a serious business of safeguarding lives and prosperity. Hence, leadership is not about oratory, but the taking of firm steps and actions towards stopping evil from destroying the land.”

Besides, stakeholders have urged swift boundary demarcation between Taraba and Benue to check the persistent bloody clashes among the Tiv and Jukun ethnic groups in the North-East state.

During a peace meeting organised by Governor Darius Ishaku yesterday in Jalingo, the indigenes agreed on the immediate cessation of the progom.

The Commissioner for Information and Orientation, Danjuma Adamu, who spoke on behalf of the Jukun, and the representative of the Tiv, Jimme Yongu, concurred that upheavals were not the best way of resolving disputes.

Also yesterday, troops of Sector 1, Operation Lafiya Dole said they had killed nine Boko Haram terrorists who were transiting the Maiduguri-Damaturu highway at the Mainok/Jakana end of Borno State.

Army spokesman, Colonel Sagir Musa, in a statement in Maiduguri clarified that the soldiers ambushed the insurgents and recovered two gun trucks, while others fled with gunshot wounds.

“So far, nine Boko Haram terrorists lost their lives and two gun trucks mounted with anti-aircraft guns have been captured during ongoing counter-insurgency operations,” he said.