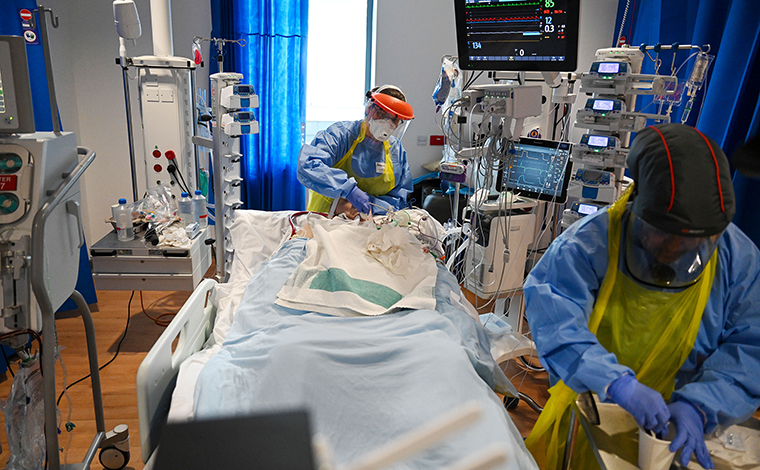 Clinical staff care for a patient in the Intensive Care Unit at the Royal Papworth Hospital in Cambridge, UK, on May 5. Neil Hall/EPA/Bloomberg/Getty Images

Older men, people who live in densely populated but deprived areas, who are obese and who have chronic kidney disease, are more likely not only to develop serious illness from the coronavirus, but to catch it in the first place, British researchers reported Friday.

Their detailed look at people who sought coronavirus tests from all over England turned up some surprises. People living in larger households were less likely to test positive, but blacks were disproportionately likely to be diagnosed with the virus, the team reported in The Lancet Infectious Diseases.

“In our sample, we found increasing age, male sex, increasing deprivation, urban location, and black ethnicity were associated with increased odds of a positive SARS-CoV-2 test,” Simon de Lusignan, from the University of Oxford, and colleagues wrote. “Chronic kidney disease and increased BMI (a sign of obesity) were the only clinical factors independently associated with a positive test.”

The team analyzed data from 587 people with positive results and 3,215 with negative results, collected by physicians across England. They found 18% of people ages 40 to 64 tested positive, compared to 4.6% of children age 17 and younger. Men were somewhat more likely than women to test positive.

And people living in poorer areas were more likely to be infected. “Of 668 people in the most deprived areas, 29.5% tested positive, compared with 7.7% in the least deprived areas,” the researchers wrote.

One surprise: Smokers were less likely to test positive. The researchers don’t think smoking protects people from infection, however.