Beaches in France and Italy opened on Saturday for the first weekend since the countries eased coronavirus lockdowns, while football fans awaited the return of major league action with Germany’s Bundesliga set to kick off.

The reopenings are a major sign of returning normality for countries hit hard by the pandemic, which has killed more than 307,000 people, infected over 4.5 million, wrought vast economic havoc and brought life to a halt.

But as countries lift restrictions to boost their stagnant economies, there have been widespread fears of a second wave of infections that could plunge the world back into lockdown.

Such fears have delayed the return of team sport — where it is almost impossible for players to practise social distancing measures — and all eyes will be on Saturday’s Bundesliga matches.

The games will be held without spectators and players will have to follow strict hygiene guidelines — former Chelsea striker Salomon Kalou was suspended by Hertha Berlin just for shaking hands with team-mates. 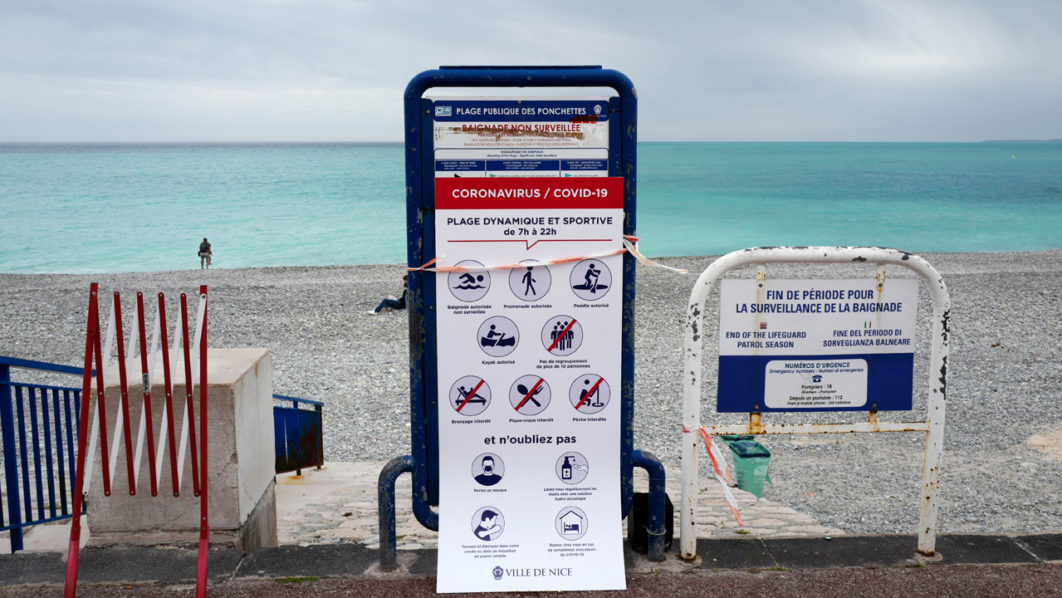 A picture taken on May 16, 2020 shows a placard by the city of Nice regarding hygienic measures and activities allowed on the beach at the ‘Promenade des Anglais’ in the French riviera city of Nice, southern France, after the country eased lockdown measures taken to curb the spread of the COVID-19 pandemic, caused by the novel coronavirus, on May 11. – Beaches in France opened on May 16 for the first weekend since the country eased coronavirus lockdowns. (Photo by VALERY HACHE / AFP)

“The whole world will be looking at Germany, to see how we get it done,” said Hansi Flick, the boss of league-leaders Bayern Munich.

“If we manage to ensure that the season continues, it will send a signal to all leagues.”

Russia has announced its own football league will return next month and pushed ahead with plans to lift restrictions despite recording its highest daily death toll on Saturday, with 119 fatalities.

Spain’s Prime Minister Pedro Sanchez said on Saturday the country would extend its state of emergency for “about a month” until the transition out of lockdown is completed.

In France, the first weekend after the most strict measures were lifted saw many venture out into the spring sunshine.

“I really missed nature,” 55-year-old doctor Lise Balmes said of walking through a forest outside Paris.

– Here comes the sun –
With the European summer fast approaching, governments are moving to help their key tourism industries to salvage something from the wreckage.

Italy, one of the nations worst hit by COVID-19, announced it would reopen to European holidaymakers from June 3 and scrap quarantine requirements for arrivals.

Parasols and sunloungers have started to appear on Italy’s coastlines and Greece will open some of its air and sea links from Monday.

Malls opened in the Philippines’ capital Manila on Saturday but saw only a trickle of customers.

“It looks like people are not too excited to come back. Maybe all their money is gone,” said shoe shop employee Kristine Grape.

However, for some the cautious easing of restrictions has not been enough.

Major German cities on Saturday will see the latest of a growing wave of protests against the country’s lockdown measures.

The demonstrations have been mired in controversies over conspiracy theories, anti-Semitism and extremism.

In a sign of rising tension, a mock tombstone was found in front of Chancellor Angela Merkel’s electoral offices, apparently to protests against the lockdown, police said Saturday.

– Vaccine hopes –
One hope of avoiding a dreaded second wave has been a vaccine, and US President Donald Trump voiced hope late on Friday that one would be available by late 2020 — a timeline deemed unrealistic by many experts.

“We are looking to get it by the end of the year if we can, maybe before,” Trump told reporters at the White House as he discussed America’s “Operation Warp Speed” effort in the global race for a vaccine.

This timeline is more aggressive than the one-year scenario put forward by European scientists.

The hunt for a vaccine for a disease that the World Health Organization (WHO) says may never disappear has also threatened to become a source of tension between the globe’s haves and have-nots.

The virus itself is having an uneven effect on communities around the world.

New research on Saturday showed that people living in the most deprived areas of Britain are more than four times likelier to test positive than those living in the richest neighbourhoods.

– ‘No celebration’ –
The pressure to ease lockdowns has mounted as the catastrophic economic effects of the virus have become clearer.

In the United States, the world’s worst-affected country with more than 87,000 deaths and 1.4 million cases, industrial production plunged 11.2 percent in April, the largest drop in a century.

Department store JCPenney, a retail institution which has not turned a profit since 2011, on Friday became the latest US business to file for bankruptcy.

“May will not be a month of celebration. Nor will June. Nor July. Nor probably the rest of this year,” warned Neil Saunders, managing director of GlobalData Retail.

With 36.5 million Americans — more than 10 percent of the population — now out of work, Trump has been keen to ease lockdown measures as he seeks re-election in November.

Some areas are resisting. Lockdown measures in New York City have been extended until May 28.

In the US House of Representatives, Democrats narrowly pushed through a $3 trillion rescue package late on Friday — but Republicans have vowed to block the package in the Senate, which they control.

Since emerging in the Chinese city of Wuhan late last year, the novel coronavirus has affected almost every country in the world.

The WHO has warned Africa, which has so far been spared the worst, could have 231 million people infected and up to 190,000 dies.

Besides its health and economic toll, the pandemic has also caused political ructions.

The latest fallout was in Brazil, which lost its second health minister in a month as Nelson Teich resigned.

An official said the resignation was due to the minister’s “incompatibility” with right-wing President Jair Bolsonaro’s approach to fighting the country’s spiralling COVID-19 crisis.