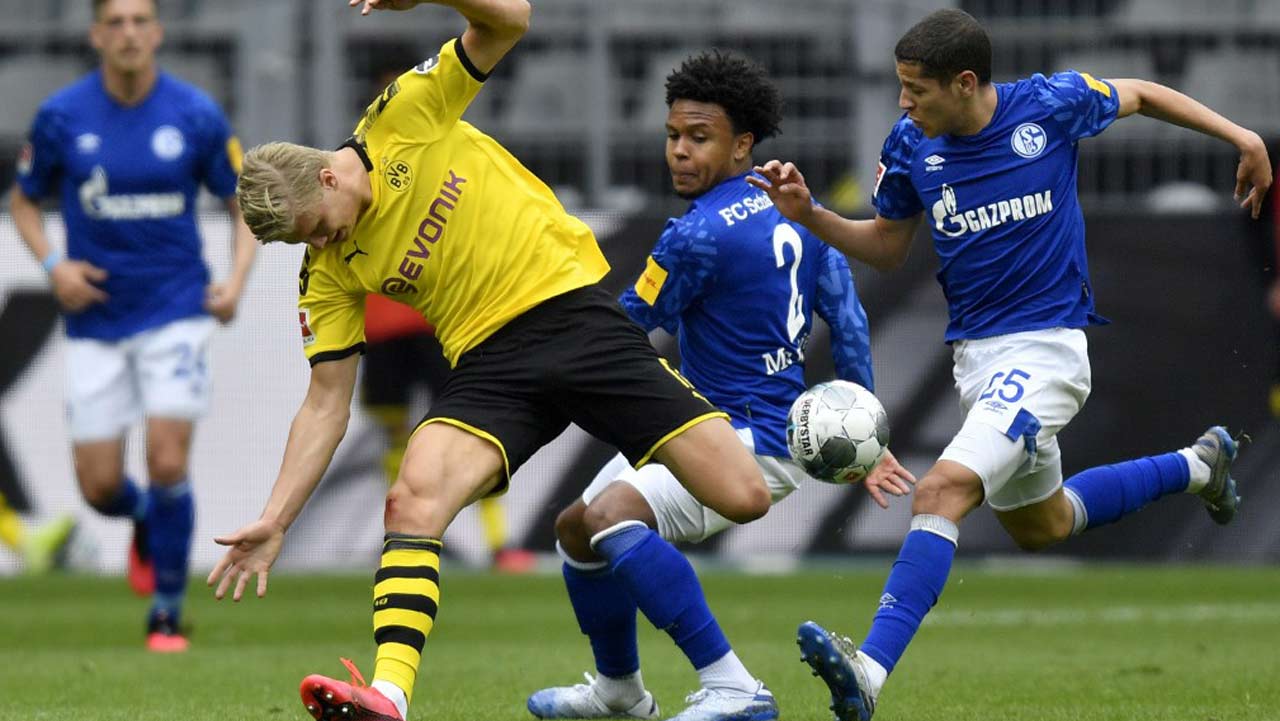 The 19-year-old striker claimed the first goal in Germany’s top flight for over two months to set Borussia Dortmund on the way to a 4-0 win over their local rivals Schalke.

Portuguese international Raphael Guerreiro then added two goals either side of a Thorgan Hazard strike as second-placed Dortmund moved to within a point of leaders Bayern Munich, who are chasing an eighth straight title and play Union Berlin away on Sunday.

Haaland steered a low Thorgan Hazard cross into the far corner on 29 minutes to claim his 10th goal in just nine Bundesliga matches.

It was his 41st goal this season in all competitions and his 13th for Dortmund in just 12 games since joining in January from Red Bull Salzburg.

Social distancing
He celebrated by dancing alone — making no contact with team-mates, who clapped him on — to comply with the strict hygiene guidelines which allowed the league to return.

In front of empty terraces and no more than 300 people allowed into Signal Iduna Park, which is normally packed with almost 82,000 fans, Guerreiro added Dortmund’s second goal just before half-time following an error by Schalke goalkeeper Markus Schubert.

Haaland played a role in the build-up to the third goal before Julian Brandt set up Hazard to fire home on 48 minutes.

Schalke looked short of match fitness, while Dortmund were sharper and Guerreiro grabbed his second in style after a one-two with Haaland in the 63rd minute.

Elsewhere, third-placed RB Leipzig were held to a 1-1 draw at home to Freiburg, leaving them four points off top spot.

Later, Borussia Moenchengladbach can move up past Leipzig if they win at Eintracht Frankfurt.

Bruno Labbadia, who replaced Jurgen Klinsmann during the lockdown, made a winning start as Hertha Berlin coach with a 3-0 success at Hoffenheim.

The goals came in quick succession with a Kevin Akpoguma own-goal being followed by Hertha captain Vedad Ibisevic grabbing a second before the Brazilian Matheus Cunha danced past defenders on the way to making it 3-0.

In order to get the political green light to resume this weekend, the German Football League (DFL) has tested players and coaches regularly for the virus and teams have been in quarantine for the past week.

Teams arrived at stadiums in several buses in order to meet social distancing requirements inside vehicles.

Although Germany has suffered far fewer deaths from coronavirus than other large European countries, it is still too dangerous for crowds to return.

Mass testing
The DFL has made no secret of the fact that several clubs are already in a dire financial situation as a result of the lockdown.

If they are able to complete the nine remaining rounds of matches by June 30, clubs could receive around 300 million euros ($324 million) in money from television contracts.

Clubs in England, Spain and Italy, where leagues are weeks away from returning, will be watching to see how the weekend goes.

The Bundesliga has been expecting millions of extra fans to watch coverage worldwide.

In Germany, there were concerns that fans would try to approach stadiums to support their teams from afar. Police in Dortmund appealed to fans to stay at home and broadcaster Sky reported it was quiet outside the ground.

Some players and coaches have already fallen foul of the rules.

Augsburg’s new coach Heiko Herrlich had ruled himself out of his side’s 2-1 home defeat against Wolfsburg after leaving the team hotel to buy toothpaste.

While Herrlich was criticised, there was sympathy for Union coach Urs Fischer after he broke quarantine following a family bereavement.

It means he must miss his side’s clash with Bayern.

Ex-Chelsea striker Salomon Kalou, 34, was suspended by Hertha for shaking hands with team-mates.

Bavaria’s state leader Markus Soeder warned that those who fail to follow the regulations should expect consequences.

“If the health experts have given you these suggestions, if the league itself has worked out concepts at great expense, then you have to abide by these rules,” Soeder said Friday.

The coronavirus has claimed over 7,800 lives in Germany and a poll by broadcaster ARD showed 56 percent of the German public are opposed to football’s return.

But UEFA president Aleksander Ceferin said the return to action was a “good sign”.