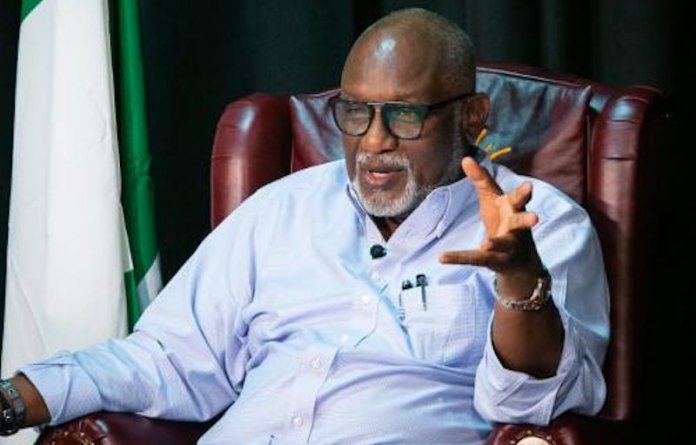 The Ondo State Governor, Oluwatotimi Akeredolu, yesterday said the N22.5 million fee charged by the All Progressives Congress (APC) for nomination and Expression of Interest forms for aspirants for the 2020 governorship election in the state is too high.

The governor’s complaint came as some political groups campaigning for his re-election as governor of the ‘Sunshine’ state yesterday contributed and presented a cheque of N22.5million to him to obtain the necessary forms.

Akeredolu, while speaking after he was presented the cheque, said he raised the objection when the fee was announced at the caucus meeting of the party that the fee was too much.

The event, which took place at the Akeredolu Campaign Office located on Akure-Ilesha road, was attended by chairmen and secretaries of donor groups, who were more than 20.

“When I contested the first and second time in 2012 and 2016 respectively, I raised the money on my own but was not as much as this.

“When the fee for this year’s election was announced, I screamed that it was too much, and that I don’t have the money.

“When I contested the first and second time, I did not see people as much as these, and this means that you are really with me,” he said.

The governor, who said no one knows the mode of primary to be adopted for the primary election, urged the people to monitor their votes and protect their votes.

“No one knows the mode of primaries the National Working Committee (NWC) of our party will come up with. Whichever mode, we are going to monitor the primary and upload results instantly. We are not afraid of any type of primary,” he stated.

Akeredolu, therefore, assured the people that their labour and contributions towards his re-election will not go unrewarded.

Speaking on behalf of all the groups, a former Speaker of the Ondo State House of Assembly, Victor Olabimtan, explained that they decided to contribute the money sequel to his performance in office.

Olabintan disclosed that as at the time of the event, the groups had contributed a total sum of N35 million to support the execution of the governor’s re-election campaign.

According to Olabintan, “These groups met and appreciated the governor for his performance in office. They contributed money to support the execution of the second term ambition.”

The cheque was jointly presented to the governor on behalf of the groups by Lucky Ayedatiwa, Alex Ajipe, Princess Oladunni Odu and the wife of the governor, Betty, who was represented by the state Commissioner for Women Affairs.