Two people are feared dead with several injured as convoy of Governor Gboyega of Osun State Oyetola was on Saturday attacked by some hoodlums while he was addressing the #EndSARS Protesters in Osogbo, the state capital.

The governor, who reportedly got back to the state less than an hour before the incident, had joined the protesters at the Olaiya junction to address them.

Protesters have since on Monday demanded that they are addressed by the governor, who InsightMedia understands was out of the state.

Protest in Osun State have been marred with attacked by hoodlums led by Asiri Eniba. The incident reoccurred today in Osogbo as protesters were attacked by thugs whole wielded cutlasses and other weapons.

Oyetola, after his failed attempt to address the youths at Alekuwodo axis of the road, joined them to trek to Olaiya junction before he was given the chance to deliver his address.

According to an eyewitness, as the governor was speaking, some people were demanding that the governor ensure Asiri Eniba is arrested as the chant of his (Asiri Eniba) rented the air.

“As the governor was speaking, protesters were demanding the arrest of Asiri Eniba. But suddenly, a voice from the back shouted Asiri is coming and that led to disruption of the whole speech. As the governor was hurriedly leaving the scenes, some hoodlums started pelting the governor’s convoy with stones and that’s how the Governor’s security details started firing.”

Another person told InsightMedia that the thugs who were in the midst of the protesters were invited after the attack on them in the morning before the regrouped.

The source said, “the problem was initially creates by associates of Mr Governor, who contracted Asiri Eniba to attack the protesters. I think they are just there to protect the protesters.

“But the attack on the governor is very bad and no sane person will defend it.”

When asked how many people were injure, the source said “it’s not possible to know how many people now. Because many have been taken to hospital. Even in the governor’s convoy, many will be injured. They also damaged the vehicles in Mr Governor’s entourage.” 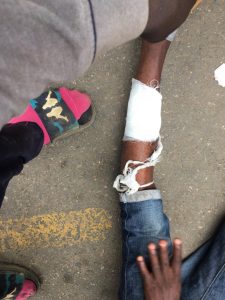 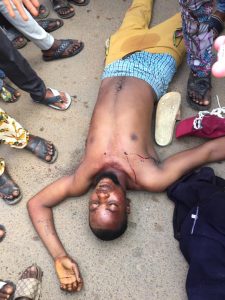 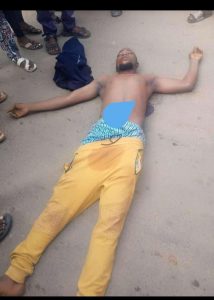